Another primary weekend come and gone, with so little clarity from national media. If I planned my consulting projects the way the media report primary results, I'd be out of business a long time ago.

Although Barack Obama "won" four states (at least winning the majority of the popular vote and therefore the delegates), as of Monday morning, 11 February 2008 at 12:00 GMT+2 the four major media sites I'm using in my Snapshot benchmark have a huge variance in results. 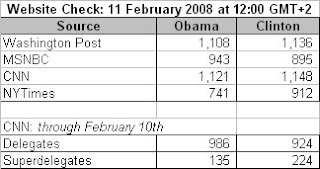 The Washington Post and CNN both count superdelegates - you can see the CNN results split out below the table. The NY Times doesn't count the weekend results. MSNBC counts Saturday's results, but not Sunday's results (Maine's).

Taking all Democratic results into count, including the Michigan and Florida popular votes, we see that Hillary Clinton is ahead with popular votes, but lags with delegates.


Excluding MI and FL, we see that Barack leads in both popular votes and delegates.


My data include the Maine popular vote, but not the Maine delegate count, which was unknown on the MSNBC site at the time of writing)

This is an upset for the Clinton campaign of terriffic proportions. Together with the fact that Senator Obama is doing better at fundraising, it will take very strong nerves to wait out the race until the finish, in the hopes of winning in Ohio, Texas and other more "favourable" states. Still, her [theoretically] larger organisation in the larger states, together with her apparent prevalence in superdelegates, could still put Senator Clinton over the top.

In this case, will Senator Obama become the new Al Gore?
Posted by Unknown at 12:01