An open letter to Dominique Strauss-Kahn and the IMF

Congratulations, for lack of a better word, on the recent intervention of the IMF in the Greek stability and growth programme. I am one of the small minority in this country who believe that without the IMF, the government will have neither the political will, nor the technical skills, to pass meaningful public sector reforms and gain control of its drastic debt situation.

In the many details of reforms that have been considered or adopted since this crisis began, I see that the most important one has not yet been raised: Parliamentary Immunity. As you are no doubt aware, all serving Members of Greek Parliament enjoy full immunity based on Articles 61 and 62 of the Constitution while the Parliament is in session (except in very narrow cases of criminal acts). You may not be aware that this immunity continues indefinitely after the end of a Parliamentary term unless the full Parliament votes in favour to waive it. In practice, this never occurs.

The result is that the major public sector corruption scandals since the restoration of democracy have for the most part never resulted in the single criminal conviction of a member of Parliament, or a single party official.

Contrasting this to where for instance Charles Pasqua was just handed a 4 year sentence for bribery regarding arms sales to , or , where Helmut Kohl resigned over a funding scandal, and one can easily see the difference in the culture of public administration. This is not to say that France and Germany are perfect, but the differences with Greece are significant.

Regrettable, even with this current crisis, I do not believe the Greek Parliament will vote to change the constitution. It will be imperative, however, that the “troika” of the IMF, the European Central Bank and the European Commission devise ways of improving the transparency and accountability of the political system that has brought Greece—and the Eurozone—into this position.

I am afraid that the time for normal courtesies and protocols is over. The majority of Greek citizens are disgusted with the corrupt, ineffectual and nepotistic practises of our political parties and our public administration, but we are essentially powerless to change them. We only hope you will be able to succeed where we have failed. 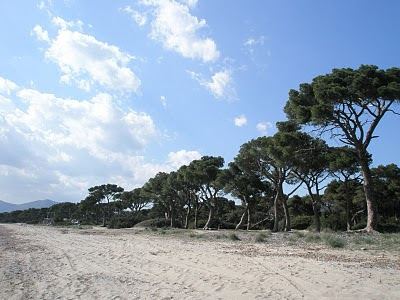 In honour of Earth Day, the Friends of Schinias are participating in a cleaning of the on. 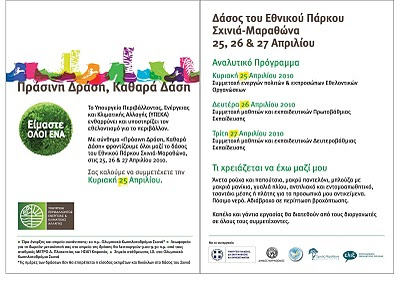 As a result, we hope for a high turnout on Sunday, to help clean areas of the forest which we have not been able to access before. We will be working with Elix, a company with long experience in volunteering activities, has been chosen by the Ministry to coordinate the event.

We will be meeting at at the parking lot of the Olympic Rowing Centre, and will clean from . A picnic lunch will follow at .

a. A hat and long-sleeve shirt or jacket and mosquito repellent

b. Water to drink

c. Food to contribute to the picnic, if you will participate.

The OASA (Attiki Bus Network) is supporting the Schinias Beach Cleanup on Sunday, April 25th. It is providing buses with free transport for volunteers to and from the event.

· From in Kifissia (πλατεία Πλατάνου)

Mirages over the Corinthian Gulf

Our family vacation house sits on the northern shore of the , about 20 km after the town of on the coastal road towards Nafpaktos. My parents bought a plot of land in 1976 or thereabouts, cleared it, and after great trouble, built a small, red tile-roofed house. Their dream was to have a house by the sea, and I remember the work we did, filling 40 liter plastic kanates by the village spring and bringing them by car to water the olive trees we had planted. Some 25 years later, those little spindly olive saplings that were whipped so mercilessly by the maestros wind have grown into large, green-silver trees that block the view the sea. But I still remember how we toiled to water them.