Three vignettes from Greece, or why we fail 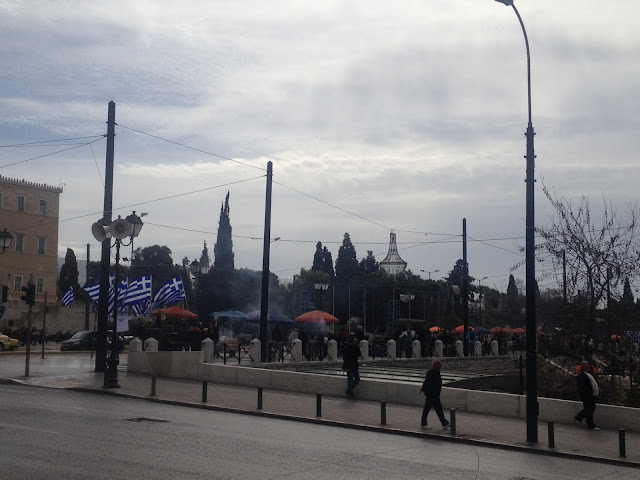 Greek entrepreneurs prepare for the farmers' demonstration in front of Parliament at noon on Friday. Flags, sausage and vromika for sale.


I’ve been back in Athens since Wednesday night. This is a brief narrative of my experiences with business culture to date.

On Thursday morning, I decided that after 10 days of emails and telephone calls, we would not be applying for a VAT number in Greece for my UK company, which is organising a major conference on investments.

In order to provide a national VAT number, the Greek Tax Authority wanted a sworn declaration with an apostille to appoint a local tax representative as well as a certified translation proving that we had a VAT number in the UK.

I tried to explain that getting this documentation in the UK was complicated, and that we were an active company, and that anyone could log onto the European Commission’s VIES system or Companies House to check that our company was registered and active.

This was not enough. I was equally surprised to learn that we could not offer services in Greece using our existing EU VAT number. (So much for the EU Single Market).

So rather than indulge this senseless Greek bureaucracy, we decided to appoint a local conference organiser, who would take 8% of turnover, to handle Greek accounting and receipts.

The irony, of course, is that our conference is the Athens Investment Summit, and the Ministry of Economy is speaking at the event, and we are supposed to be promoting Greece as an investment destination.

Yet even the most basic encounter with Greek bureaucracy reveals the Kafkaesque lengths to which the Greek state goes to prevent law-abiding economic transactions.

Also on Thursday, I had a business meeting at 15:30, to discuss a major contract to a Greek e-payments firm. The CEO, after confirming the meeting for 15:30, showed up at 16:15, 45 minutes late (without a notification), and then proceeded to bombard me with information which was irrelevant. And this was despite the fact that the contract was larger than his existing business by a significant multiple.

On Friday, I had set up a meeting at 1100 at the Grande Bretagne hotel with someone who contacted me to discuss investment in an energy project. Ten minutes went by, then fifteen. I checked email, and saw there a message to the effect that the person I was to meet was afraid of getting caught in the farmers’ demonstration, and suggested a meeting in Maroussi.

So I couldn’t help by asking myself: here is someone who is contacting me to arrange investment in an energy plant in Greece, which sells electricity to a single monopolistic client (the Greek state). And yet the representative is afraid of a farmers’ demonstration in Athens?

Just three small examples: the Greek tax authority, the e-payments firm, the energy entrepreneur. In two days. And yet I constantly keep reading articles on why Greece can’t get ahead.

We don’t need to invent complicated explanations or conspiracies. The evidence is right there, plain for all to see.

This has nothing to do with competitive advantage, capital availability or a Merkellian-Schaublian conspiracy to seize Greek assets. It has everything to do with basic management competencies and respect for counterparts. And until this changes, it will be very difficult to make any progress on the issues that count.