In favour of $ 81 billion submarines 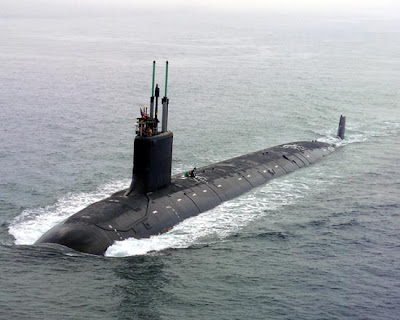 Robert Scheer's article A Submarine to Fight al-Qaida’s Navy was posted on Truthdig on April 1st, 2008 and has received widespread coverage. While I appreciate his concern on military procurement as evidence of a wider imbalance on public spending, he over-simplifies the issue, and creates a wholly wrong impression on military procurement priorities and economics and how to solve their apparent problems.

Let's start with examining more carefully the logical premises behind his condemnation of the high-tech weapons systems he mentions, particularly the Joint Strike Fighter (JSF) and the Virginia-class submarine. It's important to ask ourselves a basic question: Are we against the principle of high technology weapons systems, or only their cost?

If we are against the principle of high-tech military capacity, we should remember that Al Quaeda is obviously not the opponent in mind when designing the capacities of either system: It is Russia and China. Russia recently launched its new Borei-class submarine has stepped up aviation patrols against US carrier forces, and has resumed standing strategic bombing patrols. Recent press reports indicate that after years of arms imports, China is reducing reliance on Russian systems in favour of domestically-produced platforms and components. We know that much of China's military budget is concealed in other line items, while it's recent anti-satellite missile test is a worrying indication of their intent and capacity.

Despite our understandable focus on the campaigns currently being fought in Afghanistan and Iraq, we should not neglect the wider strategic picture. Yes, America and the West won the Cold War, and thank goodness we did. Yet the dividends of peace lasted perhaps 15 years, approximately from 1989 to the middle part of the present decade, when Russian and Chinese intentions have become abundantly clear. The fact that the United States currently has no significant rival in conventional terms ignores the fact that both China and Russia have openly stated their intention develop the capacity to project force in sufficient degrees to counter US capabilities. We are not living in an ideal world, and to claim that US military policy is solely concerned with Al Quaeda is disingenuous, or perhaps simply naive.

If we are against the cost of new-generation military procurement, we should remember that a significant part of the technology in both the Virginia-class submarine and the F-35 JSF is new. I would estimate that between 20-35% of the cost is core R&D expenditure; an additional 10-15% will be in setting up and mastering production lines and engineering for what is an extremely complex system. Both systems push the envelope in terms of performance - the Virginia class being the most quiet in its class with unprecedented underwater warfare capabilities; the JSF as the most stealthy and maneuverable multiple-capacity platform of its generation, with air-to-air and air-to-ground roles. Both systems integrate new structural designs, electronics and power systems, which are not simply a question of reverse engineering or incremental changes. 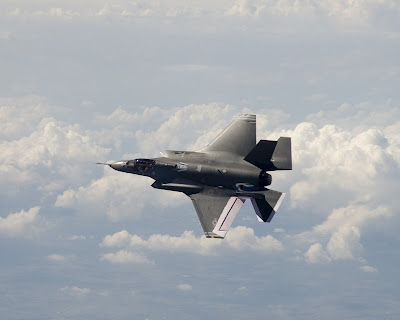 This is not a process similar to manufacturing Toyota Corollas, after all: it is more similar to manufacturing space shuttles or, indeed the space station itself. We should not be surprised by a delay in programme completion given this complexity. We should not be surprised if costs rise: inflation and rising materials costs alone (steel, tungsten, chromium, copper, etc) account for a large share of the cost increases. We should remember that these are not your standard consumer items, with a lifecycle of 2-5 years. Both the JSF and the Virginia class will be in service for the next 40 years, judging by past platforms such as the F-16 or the Ohio class.

In economics terms, we should remember that both systems are designed essentially for a single client - the US Department of Defence. Although the JSF does include international governments, the project is managed and led by the Pentagon, and rightly so. Whenever you have a single customer, it's inevitable that costs will rise and delays will occur. However, there are no easy alternatives for this, for obvious reasons. We don't want to make highly sensitive R&D and manufacturing capacity in this sector open to multiple clients, which would be one way of introducing competition, and therefore efficiency, into military procurement. We need instead to examine the structuring of production contracts and incentives, and most probably to re-design procurement and project management processes. Again, however, delays and cost over-runs on procurement programmes of this magnitude are almost certainly inevitable.

Finally, we need to remember that military and aerospace procurement leads to important collateral benefits: it employs extremely bright engineers and scientists and research institutions, while fostering high-complexity manufacturing at home. It leads to important spin-offs, such as the internet, GPS, Teflon and any number of other products. If we take a total lifecycle approach, we may find that government investment in military technology provides a net financial gain, as peculiar as this may sound.

We may agree that domestic and foreign policy has been particularly disagreeable under the Bush Administration, and that the "military-industrial" complex (or mentality) has created unfortunate results in wider US foreign policy. Whatever these negative impacts may be, I for one am happy if the US has a significant military edge over its rivals China and Russia, because the alternative is far too disturbing to contemplate.
Posted by Unknown at 10:21

Email ThisBlogThis!Share to TwitterShare to FacebookShare to Pinterest
Labels: US Military