I am constantly amazed when people – usually the elderly and the media – complain about Greek pensions or healthcare. Paradoxically, in cost-benefit terms, Greece has one of the most generous systems in the world. Consider that:

• Most Greek public pension and healthcare schemes are based on a single bi-monthly or monthly contribution that is not linked to wage levels but to years of registration in the fund;

• Under the old scheme, most taxpayers will pay in 25-30 years of contributions, before retiring as early as 50-55, when life expectancy is between 75-80 years;

• Most taxpayers will therefore take out far more than they will pay in in pensions alone, not counting healthcare costs.

Some protected classes, such as farmers and independent employees, chronically under-report their income, so the state is deprived of their financial contributions not only from pensions and healthcare, but also from income taxes, dealing a triple financial blow to the system. Other classes, such as government employees, have far more generous pensions schemes in terms of years of service and final pension payment indexes.

At my company, NAVIGATOR, we have several times attempted to calculate the actuarial costs of our healthcare and pension fund, TEBE (now under OAEE) in an effort to determine our future liabilities and what we need to do to prepare for retirement. Every time we ask TEBE how to calculate future contributions and eventual retirement levels, we receive an answer such as “TEBE doesn’t have that information – everything is changing, so we can’t give projections.”

So, we’ve tried developing our own actuarial model, which I’d like to share with you. Maybe you can spot some errors in our thinking, and help us design a better plan.

We have two partners (owners), Philip and Christine, registered in Greece under TEBE. Christine has been paying in since 1996; Philip since 2003. (Philip’s contributions in other countries are not counted in this model).

In Figure 1, I’ve charted our estimated contributions for both Philip and Christine, under the following assumptions:

a. Each partner pays in for 35 years;

b. The bi-monthly payment rises from the starting payment of EUR 250 and rises by approximately EUR 55 per year (based on contribution estimates from actual TEBE bills dating back to 1996);

c. Retirement occurs at 65 for Philip and 59 for Christine, after 35 years of contributions each.

Figure 1 shows that the cumulative contribution for both partners over 35 years is EUR 473,160, under the assumptions mentioned on annual contributions. 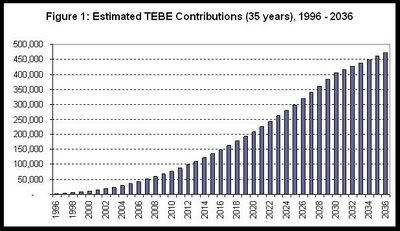 Let’s assume that TEBE achieves a 2% real annual interest rate by investing 100% of these contributions. This is highly unlikely, since the ratio of insured workers to retirees covered by TEBE is falling, and in fact TEBE has to use our contributions to pay for other TEBE retirees as well as hospital patients, pharmaceuticals and medical consultations.

This 2% income also assumes that TEBE has no administrative costs, but can gain maximum benefit from its tax contributions. This is obviously highly unlikely. But let’s give TEBE the benefit of the doubt and assume a 2% increase in real terms. 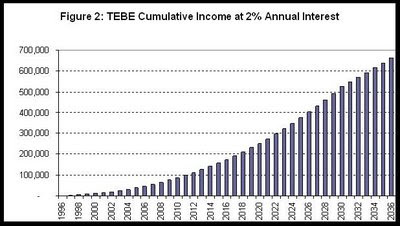 Now, let’s try to estimate pension benefits from the system. My accountant has informed me that after 35 years of payments, the two partners should be able to count on a monthly pension of EUR 1,020 in 2006 Euro (we will not adjust for inflation). According to the World Health Organisation (WHO), average life expectancy for women in Greece is 81.1 years, while for men it is 76.32 years. Let’s assume both partners live to the age of 80, and each draw down a starting pension of EUR 1,020 per month, adjusting for inflation at a rate of 3% each year. 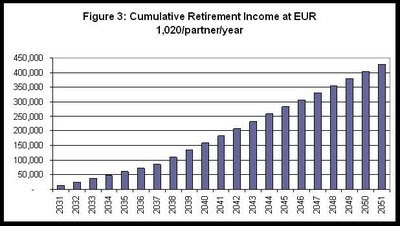 So far, the TEBE pension covers pension costs costs. But what about health insurance and healthcare costs? TEBE offers cradle-to-grave healthcare insurance: nearly 100% of all pharmaceutical, surgery and medical consultation costs are free to the insured, including dependent spouses (if they are not covered by their own social insurance) and infants (up to age 18).

It’s impossible to predict such costs, but I’ve started at EUR 200 per year (total for both partners in 1996), and increased by:

Remember, these are for all medical costs (except teeth and eyes), including pharmaceuticals, consultations, hospitals and surgery, including family members. This represents the cost to the government for offering these services. So far, speaking empirically, the model works: between 1996 and 2007 we have spent EUR 10,700 on medical expenses, and this is without any major medical issue, i.e. it comprises only routine medical costs. 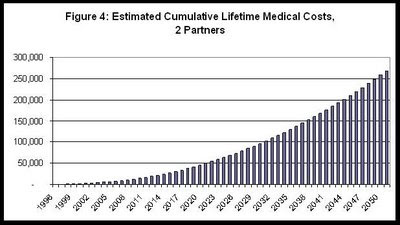 Figure 4 shows that cumulative costs to the Greek government will be EUR 268,700 for the two partners, to 2051.

Assuming these forecasts are correct, TEBE will receive a total income (compounded at 2% real interest) of EUR 664,272 from the two NAVIGATOR partners between 1996 and 2036. This assumes that it has no expenses, does not use this income to pay for the pensions and healthcare costs of other retirees or workers, and that the investment performance of 2% per year is stable. Yet between 1996 and 2051, it will pay out EUR 697,100 in benefits to the two partners. This presents an immediate lifetime deficit of EUR 32,828. This is seen in Figure 5, below. 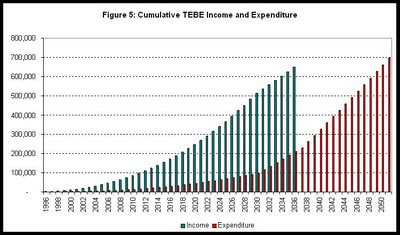 Let’s not forget that these forecasts present an optimal case: that both partners are gainfully employed, that they pay their contributions on time, and that each partner can afford to pay an end-of-term annual TEBE payment of about EUR 12,200 each per year.

This case proves my initial claim: that the Greek social insurance system is remarkably generous, since clearly it will have to pay much more to each insured person that it is taking in. Let’s not forget that many beneficiaries of the system have retired far earlier, while others have not yet worked at all, but are claiming the pension of their deceased spouse.

This is a main reason why the OECD estimated – before the latest round of pension reforms – that Greece’s unfunded pension liabilities may be 200% of GDP, or over EUR 400 billion, in the pessimistic case. Given current demographic trends, with Greece’s population shrinking after 2012 and the ratio of workers to retirees falling below 2.0, conditions are almost certainly going to become worse.

So what to do? On the one hand, it’s clear that the government has to save more to cover future liabilities. On the other hand, it’s also clear that companies and individuals have to prepare for their retirement, using private funds to complement public funds. I’ll get into recommendations in another post. In the meantime, if anyone can spot any calculation errors, please let me know.
Posted by Unknown at 11:06