Forecast of Greek Debt to 2015

As part of our corporate planning, I’ve been developing a forecast of Greek public sector expenditure, revenue, debt and GDP to try to understand how the economy will develop over the next 5 years.

This is more than just a simple forecasting exercise: over the last 6 years, I’ve become deeply disturbed by the inability or unwillingness of successive administrations to address this issue. If Greek debt continues to rise at on its present track, we can expect a continuing fall in national competitiveness and possibly a technical default on debt payment in the next few years.

Either way, the reputational damage to my firm will be significant. I can’t imagine how we can bid on new work as a Greek investment advisory consultancy, when Greece has the highest debt-to-GDP in the Eurozone, and has consistently flouted EU regulations since its entry in 1981. After one point, it won’t matter how good our proposals are: we will have no credibility as a service provider associated with Greece.

This forecast, together with a number of other factors, will be used to make a decision on whether to remain headquartered in Greece or not. I would therefore appreciate any comments of feedback on this model, its assumptions or its outputs.

My base case model for Greek debt is seen below. All data has been based on Eurostat stastistics, accessed from the Eurostat website on 8 December 2009. For 2009 estimates, I have relied on general press reports that (a) the annual deficit will reach 12.7% of GDP, and that (b) public debt will reach approximately 120% of GDP. My model captures the deficit target but not the public debt target.

• General government revenue rises from EUR 97 bln in 2008 to EUR 120 bln in 2015. This is achieved through a crack-down on tax evasion and higher tax collection. Government revenue as a share of GDP rises from 40.6% of GDP in 2008 to 41.9% of GDP in 2015—a historic high in the Greek economy. Specifically, I’ve estimated a fall of EUR 7 bln in 2009 as an effect of the recession, and an increase of EUR 5 bln per year thereafter as the economy rebounds and tax collection efforts take hold.

• The annual deficit widens to EUR 30.4 bln in 2009, or 12.9% of GDP. The deficit continues to increase in absolute terms every year, reaching EUR 41.1 bln in 2015. The deficit calculation shown here is the difference between government revenue and expenditure, and does not reflect additional income gained from privatisations or other measures. Unfortunately, it also does not reflect the rising interest income the Greek government must pay for its debt: I estimate that in the base case, the expenditure and revenue changes of this type will cancel each other out.

I have also tried to estimate annual interest payments on outstanding debt, using a relatively low interest rate of 3%. This is below the historical average. Under this scenario, annual payments rise from EUR 8 bln in 2009 to EUR 14.5 bln in 2015. At this stage, interest payments account for 12% of general government revenue.

The forecast results are shown graphically below; my data set follows. 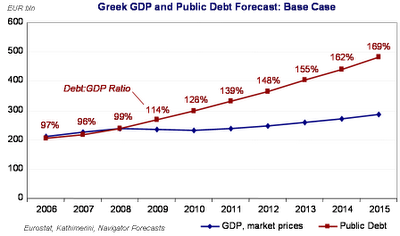 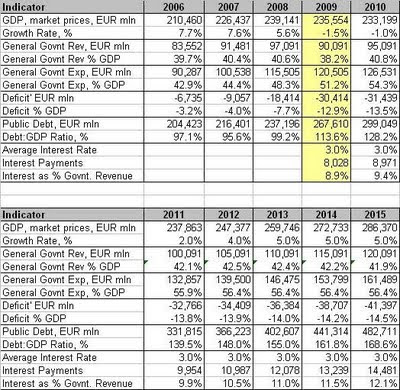 This admittedly simple forecast provides a number of disturbing conclusions:

a. Greece does not have a serious plan to reduce long-term debt. PASOK’s electoral promises and the early signs of its policy are aimed at managing electoral expectations and balancing this with Greece’s national obligations to the European Currency Union and the Stability and Growth Pact. Reducing the annual deficit from 12.7% of GDP in 2009 to 9% in 2010 is a start, but much more radical deficit and debt reduction measures will be needed if the total debt is to be reduced. Neither PASOK nor ND have announced any meaningful measures in this respect.

b. The public expenditure calculations provided here are based on current spending: they do not include the costs of financing long-term, unfunded liabilities such as the need for public financing of social security obligations (for retirement and healthcare funds). The expenditure calculation does not directly include the costs of higher debt financing, particularly if interest rates rise (as they are expected to do). We can therefore expect public expenditure to rise by at least 5% per year.

c. The public revenue forecast is below the historical average between 2005-2008: perhaps higher expenditure could be booked, although it is difficult to see how: privatisation income is falling; the construction market is frozen; VAT cannot easily increase. Nevertheless, I ran a scenario in which government revenue increases by EUR 10 bln per year from 2010 onwards. The results are seen in the figure below: 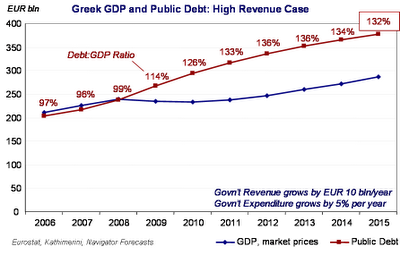 e. The only scenario in which debt falls to below 100% of GDP would be one in which revenue grows while expenditure is stable (or falls). In the next scenario, I plot a EUR 10 bln rise in revenue per year, against stable government expenditure. This would be sufficient to bring the debt-to-GDP ratio down to 84% in 2015. However, such a scenario is clearly impossible to imagine: it is equivalent to eliminating 5% of Greek public sector expenditure every year for 6 years. Desirable, but highly unlikely given the current political party in power, and given the factors already discussed: rising interest rates, unfunded liabilities, etc. Greek public sector debt will continue to rise under the PASOK administration. Assuming this government lasts for 4 years, I estimate that by 2013 public debt will have reached over 150% of GDP, unless drastic policy measures are taken. This would require a fundamentally new budget approach at the end of 2010, once the [current] economic crisis is in its final stages in Greece. No such current approach is discernable at any level of the government.

Because we receive so little from the Greek public sector, and because it is clearly destroying our country, my own decision on where to base my company in the future will be made in early 2010. I would welcome any comments or opinions which could help me revise my opinion, or the data I have presented here.
Posted by Unknown at 12:51