Why does Greece need a “Centre for Democracy”?

The past week has seen a number of policy announcements and other political developments by the government in , as well as by individual politicians, which leaves most observers with the sense that the governing party has lost all sense of reality.
One such announcement was the apparent creation of a Centre for Democracy. This was reported in press on Thursday, 17 February, as an outcome of a meeting between the Greek Minister of Foreign Affairs Dr. Dimitris Droutsas with his British counterpart, William Hague. The Greek Foreign Minister heralded the creation of a Centre for Democracy, to be located in . This centre would apparently teach unnamed members of Arab states about democracy, good governance, and social justice.
Such a proposal, coming from the political party which has ruled for many of the disastrous past 30 years, and which is proportionally responsible for the crisis finds itself in, is ironic in ways that not even Socrates could contemplate. The fact that the present government has either refused to prosecute major bribery cases (e.g. Skaramanga) or has implicated its own high-ranking former officials as being recipients of bribery, was perforce overlooked by the Foreign Minister in the press conference.
Yet these are the facts. If the record of governance and social justice is anything to go by, it hardly seems likely that PASOK will teach “the Arabs” about these issues–except perhaps how not to govern. One would have hoped Dr. Droutsas’ international experience and knowledge of history would have been enough to engender a little more humility and common sense. Apparently not. 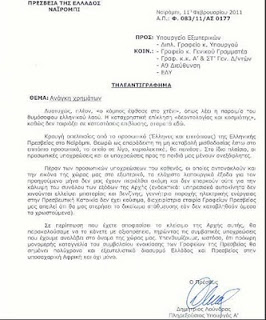 The irony is of course compounded when one realizes in what dire straits the Hellenic Ministry of Foreign Affairs finds itself. The Greek ambassador to has complained of unpaid salaries and a cut-off of electricity due to unpaid bills. A Greek embassy in a Scandinavian country recently had its electricity disconnected, because the Embassy had not paid the bill. Other embassies apparently face eviction due to unpaid rent.
The ultimate question, of course, is whether this is an effective a use of taxpayer’s money.   owes over EUR 340 billion. Salaries and pensions have been cut; suppliers and temporary staff are unpaid. Who is going to pay for this Centre, and what tangible economic benefits will receive from it?
It seems to be yet another waste of money, a diversion of focus on the key areas of implementing domestic reform and badly-needed foreign investment. Instead of real economic reform, the government incessantly launches glowing initiatives which it can not pay for, and for which it has no credibility. This is hardly a prescription for economic recovery. Greek citizens should not be surprised if our international creditors meet requests for more funding with hesitation, if not mirth.
(c) Philip Ammerman, 2011
Navigator Consulting Group
www.navigator-consulting.com
Posted by Unknown at 11:04