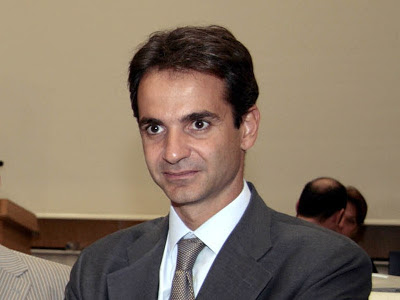 For what will it profit a man if he gains the whole world and forfeits his soul?
Matthew 16:26.

Samaras was Foreign Minister under Konstantinos Mitsotakis’ government until he was expelled in 1992 over the issues of privatisation and the Macedonia name dispute. He lived in the bitter wilderness until 2004, when Konstantinos Karamanlis, scion of another political family, invited him back into the New Democracy (ND) fold for the elections against George Papandreou that year.

In an unexpected reversal, Samaras defeated Dora Bakoyianni for leadership of the ND Party in 2009, following Karamanlis’ defeat by George Papandreou. So it was the turn of the Mitsotakis family to go into the cold. Until now.

As Minister of Administrative Reform, Mitsotakis has been handed the poisoned chalice of meeting the Troika’s targets to lay off 150,000 public sector workers to 2015, and specifically 15,000 by 2014. Of these, 4,000 must be fired this year.

Kyriakos Mitsotakis is, in formal respects, a highly-trained, competent person. He studied economics and business at Harvard and Stanford, graduating with stellar marks. He worked at McKinsey, one of the top consulting firms, as well as Alfa Ventures and the National Bank of Greece’s Venture Fund.

Which makes his very public flip-flopping over Greece’s commitments a particularly tragicomic one in the past week, since he became Minister.

Last week, he stated that of the target of 4,000 lay-offs in 2013, 2,656 had already been achieved with the closure of ERT. This can only be described as a Greek form of “voodoo economics”:

·       The ERT workers have not actually been fired: the Greek Council of State has ruled that ERT must remain on air while its liquidation is implemented and the new broadcaster is formed. It is painfully clear that the way the “closure” has been implemented violated Greek constitutional law as well as European public law. The closure cannot be taken for fact at this point in time, especially since the full termination compensation has not been paid.

·       The government—based on a memorandum of cooperation between Prime Minister Samaras and Evangelos Venizelos—have agreed to re-hire 2,000 of the fired workers for NERIT. Based on their own words, many of these will be the same workers, hired based on “axiocratic criteria”.

It’s therefore a question of simple subtraction that in the best case, the prior “achievement” is not 2,656 lay-offs, but 656. And only once they are implemented.

Does Minister Mitsotakis really believe the Troika will be pleased with this kind of juggling? Or does he believe that he can dodge the bullet of adverse public opinion?

But the Mitsotakis gambit does not stop here. In addition to the previous creative mathematics, he was also hoping to convince the Troika to grant more time to decide which staff to place in a labour reserve. On the face of it, this seems like an honest request: after all, he is a newly-appointed minister.

What this argument deliberately ignores, however, is that Greece made this public commitment to a labour reserve in mid-2011, but has never implemented it. Mr. Mitsotakis, as a member of Parliament since 2004, is surely aware of it. He also knows that it is a key monitoring point of the Troika who has been asking every quarter to see evidence that the labour reserve has started operations.

These two decisions are incredibly damaging to his personal credibility, as well as the credibility of the country.

What does this entire episode tell us about the state of the government today, and its key players?

Samaras has made a macabre political decision—he has appointed Kyriakos Mitsotakis to Minister of Administrative Reforms, knowing that the full political cost would fall on the son of his hated former mentor and rival Konstantinos Mitsotakis.

Kyriakos Mitsotakis was ambitious or foolish enough to accept the position, and apparently thought he was too clever for the troika, or for public opinion, and that Mitt Romney-scale flip-flopping would see him through.

Once again, absolutely no one in government appears to have a rational plan for public sector restructuring or lay-offs. There are some 6,000 Greek civil servants who have been found in dereliction of their duty, but even these 6,000 have not yet been fired. The political cost is simply too high: the margin of seats in Parliament is too low.

Yet perhaps the most depressing finding is that people who have had the benefit of education at top international universities, who were appointed to bright jobs on the strength of their political families, apparently think they will “win” by a craven behaviour that displays a total lack of respect for the truth, or for common sense.

This succession of failure can only be described as systemic, and total. The CVs of the last four prime ministers of Greece are eerily similar: top US universities (three of the four were at Harvard), high positions greased by political influence, every opportunity for honest success which most “outsiders” never have. Yet not a single one has behaved honourably.

And judging from the antics of Mr. Mitsotakis this past week, there is no shortage of future candidates for Prime Minister who share the same elite background, and who will behave exactly the same way.

“If the taboo on firing workers in the public sector ends, the government will win an important negotiating weapon, in order to achieve changes in tax policy and in questions which affect the larger majority of citizens, such as non-performing loans.”