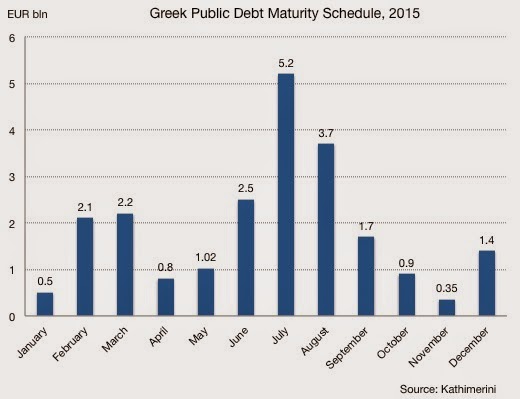 George Stathakis, SYRIZA MP and shadow development minister, was interviewed by the Financial Times on January 6th (SYRIZA to crack down on Greece’s oligarchs if it wins election) and stated that:
Greece is running a central government primary surplus of € 3.566 billion in the first 11 months of 2014. Assuming the year closes without a loss of income due to the elections, Greece will have sufficient reserves to pay for nearly the first three months of debt redemptions in 2015.
“We don’t have to worry until August,” he said. “We will have enough cash from the 2014 budget surplus and the finance ministry reserves to keep going through July, and that’s without raising any short-term financing from issues of treasury bills.”
The Finance Ministry reserves are not identified. However, other SYRIZA statements imply that SYRIZA will tap the unallocated reserves of the Hellenic Financial Stabilisation Fund, which was established to recapitalise the Greek banking system following the 2012-2013 Private Sector Involvement (PSI), or debt haircut. HSFS was capitalised with € 49.7 billion, and according to its 2014 9 month Interim Statement, has suffered losses of € 20.3 billion in the first 9 months.
Quite apart from the fact that HSFS is a private sector organisation and not part of the Greek government, there are no actual cash reserves available for “sequestration” by the government. HFSF's 9-month cash reserves in 2014 were only € 625.3 million (far less than the unallocated capital raised). HFSF is financed by European Financial Stability Fund (EFSF) floating rate notes. Therefore, any attempt by SYRIZA to use HFSF’s unallocated reserves is therefore an illegal seizure of EFSF funds. We recall that the EFSF is instrumental in the main bail-out of Greece, with € 141 billion disbursed to date (including € 48.2 billion in bank recapitalisation funds).
It is impossible to see how SYRIZA would float short-term Treasury Bills, and at what interest rate. It might be able to “convince” the systemic banks to absorb a certain amount of domestic demand (much as the current coalition government did in 2014), but it is difficult to see how this can be done in conjunction with a potential European Central Bank refusal to accept Greek government bonds as collateral, as would certainly be the case if SYRIZA persists in its “hard default” negotiation scenario.
In short, it is difficult to understand how SYRIZA would both be able to pay for its legislative programme announced at the Thessaloniki Trade Fair, and handle Greece’s debt redemption schedule in effect for 2015. Even the low amount of € 20 billion can only be refinanced by a third financial aid facility to Greece. The only other alternative is a real default on the Greek national debt.