News on Friday was dominated by the press conference held by Yanis Varoufakis, Greek Minister of Finance, and Jeroen Dijsselbloem, head of the Eurogroup (and Dutch Finance Minister).

There are two elements about this press conference which need to be assessed. The first is the purely theatrical aspect designed for the audience of SYRIZA’s political supporters. This occurred at the end of the press conference, after kind words of “constructive meetings” and “mutually beneficial relationships” had been uttered.

Yanis Varoufakis made a statement to the following effect:

There are two things obviously wrong with this statement. The first is that since SYRIZA has no problem with the IMF, ECB and Eurozone creditors on a bilateral basis, complaining about the Troika is illogical. They are exactly the same organisation; the staff of the monitoring missions are employees of the creditors. You can’t accept the legitimacy of the parent organisations (IMF, ECB, EC) but challenge the legitimacy of the monitoring team.

In fact, what SYRIZA is complaining about is its disagreement with a monitoring mechanism for the loan agreement. And this is equally a non-starter. No European or multilateral creditor will lend money to Greece without conditions.

The second is that the insulting nature of the statement and the body language was obvious to anyone watching the press conference. Look beyond the obvious fact that Varoufakis is insulting Dijsselbloem, who acts as the Eurozone creditors’ head of the Troika.

Look at the following stills from the press conference (taken from the Kathimerini media gallery):

Still 1: Varoufakis in his final statement 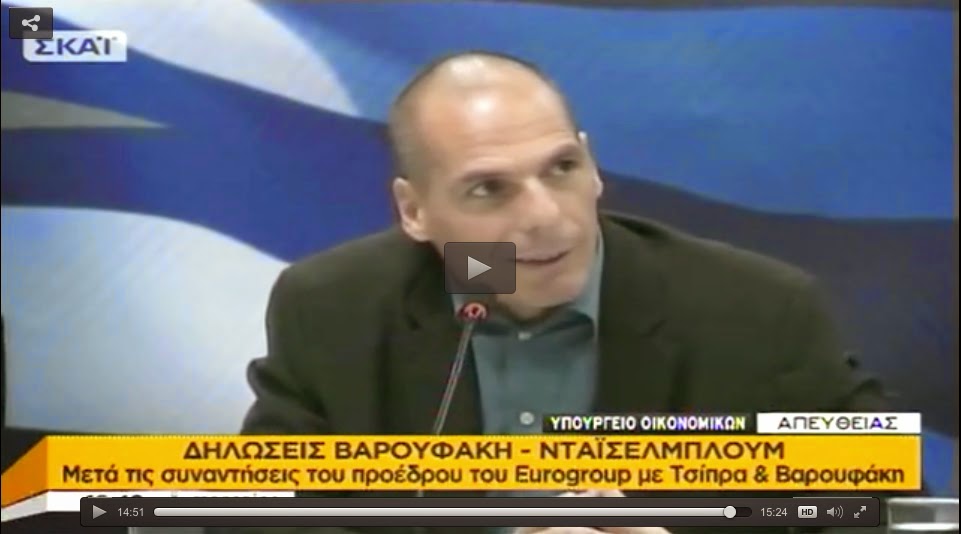 In this photo, Varoufakis is still playing by the normal script of a press conference, but is delivering his “rotten committee” statement. 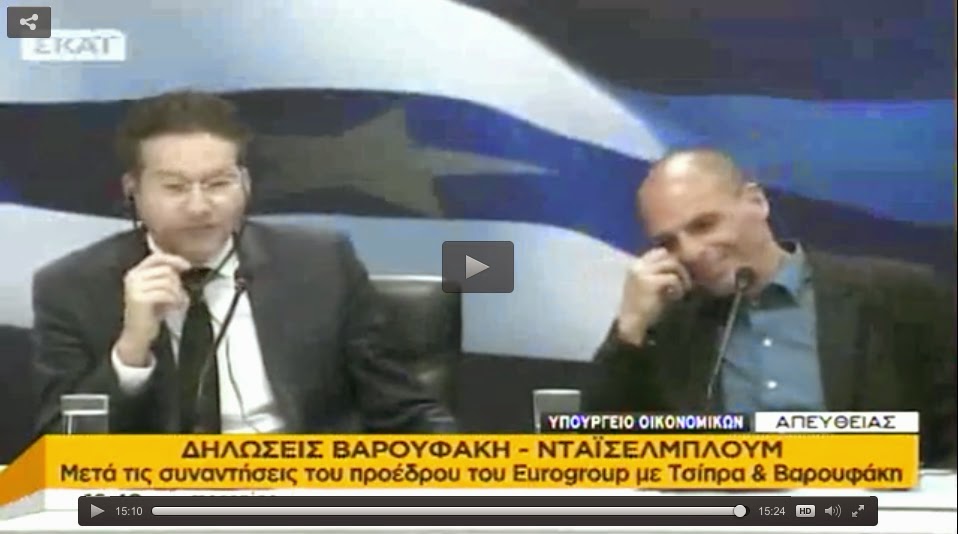 In this photo, Varoufakis is chuckling as the simultaneous translaction catches up and Dijsselbloem realises what has been said. 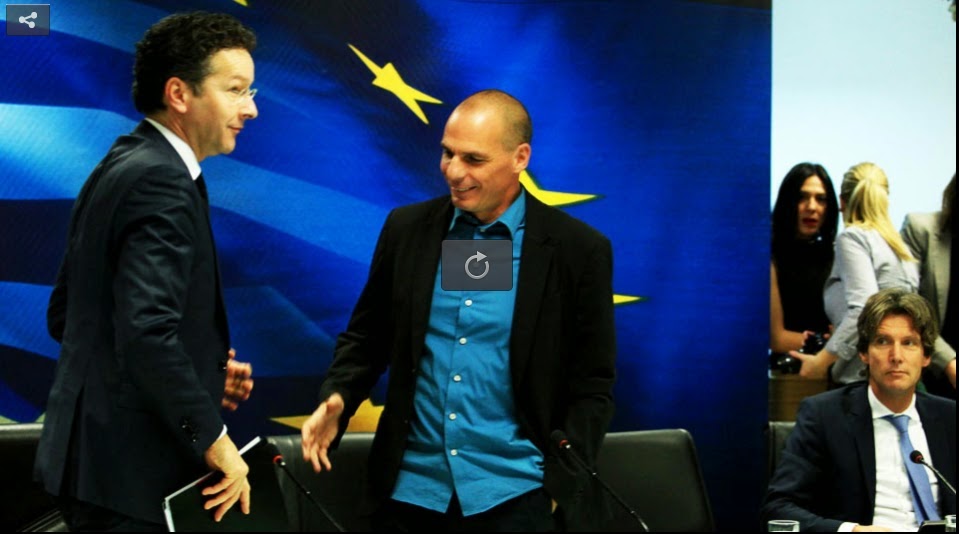 In this still, Varoufakis and Dijsselbloem shake hands. The Greek finance minister is dressed in a casual manner which is inappropriate for this process. Dijsselbloem leaves without statements.

The political theatre here is obvious: Varoufakis against the Troika. But beyond the theatrics, let's look at the second element of this event: the substance of Varoufakis' declaration.

1.     Greece will not request an extension of the current programme, and will only negotiate on the basis of a new programme it will define.

2.     Greece will not accept any form of loan conditionality which would be monitored by a monitoring mission from its official creditors. (If you disagree with one Troika, you will disagree with another).

3.    Despite his sophistry about “the European Parliament” defining the Troika as a rottenly constructed committee, Varoufakis has deliberately and gratuitously insulted Greece’s Eurozone partners.

If we take these facts at their face value, then the conclusions are clear: there will be no additional funds disbursed for Greece. It will have to default on its debt by February, and will find it impossible to pay for regular government operations, let alone SYRIZA’s campaign promises.

The damage done by this press conference is clear:

·        While mainstream press were praising Greece’s “valiant stand against austerity” (fundamentally misunderstanding the key issues in Greece) at the beginning of the week, by Friday night opinion had started to harden against Greece and SYRIZA, and will continue to do so all next week.

·        Nearly all Eurozone partners, together with the IMF and ECB, have warned that while debt maturities can be extended, there is no question of a debt write-down. Ireland, Portugal, Spain, France, Germany, Netherlands and Finland have come out against a write-down, as well as against a European debt conference. Wolfgang Schauble stated very coherently that “We’re prepared for any discussions at any time but the basis can’t be changed. Beyond that, it is hard to blackmail us.”

·        Yanis Varoufakis himself left Saturday afternoon for Paris for emergency talks with the French government, trying to put out the fires his statements had caused. He was originally scheduled to leave next week.

SYRIZA does not seem to understand some fundamental points about the operations of sovereign states or financial partners:

a.      Insulting your official creditors, who have lent you € 252 billion of public funds to correct your own mistakes, is not a good idea. It is certainly not a good idea when you are about to ask them for additional loans and a write-down.

b.      SYRIZA has never explained how it will pay for its campaign promises, let alone manage the Greek economy. At least not in any realistic terms. And aside from a barrage of ad-hoc policy measures announced this week, they have still not announced their policy plan in Parliament. (It is expected this weekend or Monday).

c.      You can’t manage relations between financial sector partners with the clever sophistries and empty platitudes with which you teach an undergraduate seminar on Marxist economics.

d.      It is pathetic that after 2.5 years waiting for the day they would take power since the May-June 2012 double election, SYRIZA is not better prepared, with a real, means-tested plan for implementing their policies and managing Greek debt.

As a result of this press conference, expect to see a major hardening of the European response over the next few days. Minister Varoufakis will no doubt claimed he was “misquoted”, and he has already back-pedalled or claimed he was misquoted several times over the last few days. But no serious creditor believes that Greece will present a “mutually beneficial solution”, and they are tired of Marxist double-speak and empty rhetoric.

Also as a result of this press conference, and the events of this past week:

·       Expect bank deposit withdrawals to accelerate. We should have a complete estimate for January 2015 soon, but preliminary reports have mentioned withdrawals as high as € 20 billion (Lorenzo bini Smaghi in the Financial Times).

·       Greek banks now need to increase their Emergency Liquidity Assistance (ELA) support from the Greek Central Bank. Given the confusion over SYRIZA’s real intention, expect the European Central Bank to restrict further ELA, unless Mario Draghi is feeling unusually generous. I would not be. Greek banks are now technically insolvent, largely due to the actions of their own government.

·       Foreign and domestic investors are already taking flight. The Athens Stock exchange plummeted. Several major projects were either cancelled by SYRIZA or put on hold by the investors.

Alexis Tsipras and Yanis Varoufakis came to power with 36% of the national vote, in an election with a 36% absention rate. That is to say, they have won 2,246,064 votes, which is only 27% of all votes cast, and only 20.8% of the Greek population. One would have hoped that they would govern with humility and carefully-considered actions given the magnitude of the crisis and the fragility of their own support. One would hope in vain.