A Tale of Two Images

On Thursday 18 June and then again on Monday, 22 June, thousands of demonstrators gathered at Constitution Square in Athens to protest in favour of remaining in Europe. The demonstrations were identified by the slogan Μένουμε Ευρώπη, or “We Stay in Europe”.

I attended the second demonstration. Not due to any allegiance to any political party, but in order to express my deep dissatisfaction with the way the current government has openly gambled with the Greece’s European membership. At this demonstration, I met people who are educated and hardworking professionals or business owners, who have paid a lot more in Greek taxes that most. No one there was demanding anything specific: certainly no one was demanding higher state salaries or other benefits. It was not that kind of demonstration.

I was therefore horrified to see the following image posted by none other that Dimitris Kammenos, a Member of Parliament for ANEL (Independent Greeks). This image shows the gates of the Auschwitz concentration camp, with the words “Arbeit Macht Frei” replaced by the words “Μένουμε Ευρώπη.“

To me, this image symbolizes two things:

1.   Ostensibly, Mr. Kammenos has posted this to compare the austerity measures imposed by the Troika on Greece as being equivalent to Auschwitz. This is obviously totally inaccurate and deeply insulting, not only to the 1.1 million that died at Auschwitz, but to the millions of Europeans who have been refinancing Greece’s debt (and Greece’s mistakes) from their own tax income.

2.   More ominously, when I first saw this, I understood the message to be that all the people who demonstrated at the “We Stay in Europe” event were bound for Auschwitz. The threats made by SYRIZA members and associated groups both during and after the event did little to dispel this image.

Although Mr. Kammenos apologised for the insult done to Holocaust survivors, and although Independent Greeks issued a statement claiming that this image does not represent it, I and many others will not soon be forgetting this.

The second image is that of Arkas, a popular Greek satirist. A sample of his work is seen below: 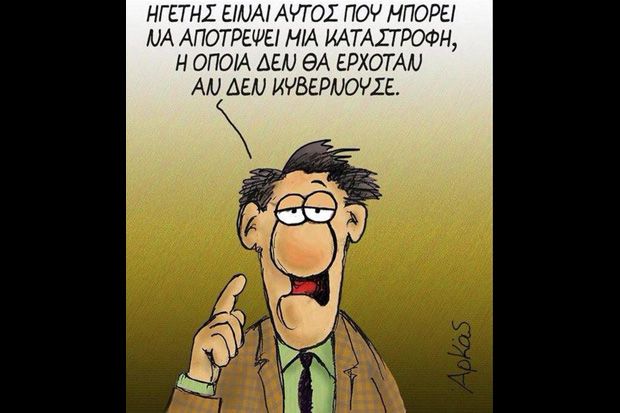 This and other cartoons led to his Facebook page being inundated with hateful comments and threats, apparently by SYRIZA followers or other supporters of the present SYRIZA – ANEL government. The Facebook page was deactivated out of fears for his own safety, but later reactivated.

These two images are only part of a long list of events that indicate the threat to free speech posed by political supporters in Greece today. From SYRIZA MP Kostas Lapavitsas singing the EAM song in January, to the group of “anarchists” suggesting that the massacre at Meligala during the civil war was “only half finished”, the prevailing tactics used by certain political groups is all too clear. These tactics have recently been extended in the educational sector through the abolition of university councils and of electronic voting for university rectors.

A recent article indicated that many SYRIZA supporters seemed intent on re-fighting the Greek Civil War. I can only attest that events these past few days bears this out.

With the Charlie Hebdo attacks still fresh in our minds, and with a strong culture of left wing / "anarchist" violence in Athens, I wonder how much longer the relative peace in this country will hold out.