Princeton establishes a Center for Scholars in Athens 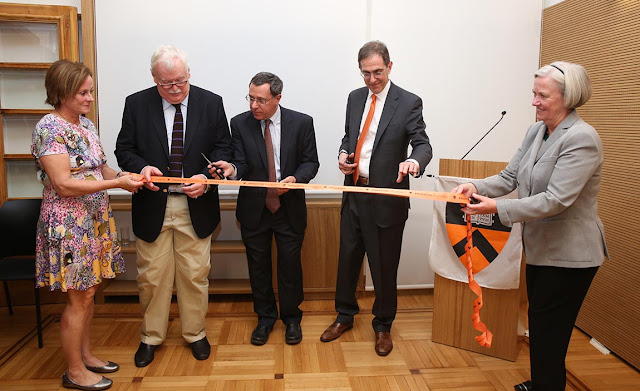 "An academic home in Greece embodies some of the key goals of the Stanley J. Seeger Hellenic Fund, established in 1979," said Dimitri Gondicas, founding director of the Seeger Center and a 1978 alumnus. "Creating the Princeton Athens Center was consistent with the vision of our benefactor, Stanley J. Seeger '52, whose legendary generosity made it possible for Princeton to be a world leader in Hellenic studies." Every year, the Seeger Center for Hellenic Studies supports more than 100 Princetonians for study and research in Greece, said Gondicas.

At an evening reception at the new Center, Gondicas opened his remarks in Greek: "Kalos orisate! Welcome! … Princeton has enjoyed strong, enduring links with the Hellenic world, and it has been an international leader in the study of Greek culture. As scholars, educators, philanthropists, public servants, business people, art collectors and writers, Princetonians have contributed immensely to the cultural and international relations between Greece and the United States."

Princeton President Christopher L. Eisgruber participated in the ribbon-cutting ceremony and greeted the 55 guests including faculty, students, friends, and more than 30 undergraduate and graduate alumni spanning more than 50 years.

"This is the first time Princeton University has opened a research and scholarship center anywhere outside of the United States," said Eisgruber, Class of 1983. Acknowledging the "extraordinary generosity and vision" of Seeger's gifts and the gifts of many alumni attending the reception, Eisgruber said that one of the reasons the University chose to establish the center in Athens "as we become a more international university" is Princeton's "extraordinary humanistic tradition that finds its home here in Athens and in Greece."

He said these alumni gifts ask the University "to build upon the study of ancient and modern Greece and to do so in a way that understands the broad influence of Greece in the world. As we seek to make this enterprise succeed ... we will depend on our connections here in Greece to make this a thriving hub of activity."

Read the full article at the Princeton Club of Greece website.