A response to Napoleon Linardatos (II)

Thank you for your response to my comments. I am glad that we both share a love for Greece, and a commitment to market economics. I fear, however, that you may not have a proper picture of what is occurring in Greece over the past few years.

As I evaluate matters, things are getting better, although the situation remains far from ideal, and much remains to be done. I will support my evaluation through factual responses to your comments.

Your comment on public works is misplaced. You state that:

I am not against public works. The point I was trying to make is that all this huge public projects have always been seen as a substitute for the real work that is necessary to change Greece. You only have to watch news reels from the 50s to see the same old picture – some prime minister, cement, bricks and the false sense of progress.

There is abundant evidence among classical economics that investment in public works yields both immediate and future growth in productivity, employment and GDP. In any case, the examples of public works you mentioned – the Athens Metro and the Egnatia Motorway – are both good examples of public-private partnership in infrastructure development, and a further indication of the “liberal” tendencies in the Greek economy.

The Athens Metro, you will recall, is managed by a public-private consortium, and was developed by Olympic Metro S.A., consortium of 22 firms led by Siemens Transport Engineering, under BOT procedures (build-operate-transfer) with the support of EU Structural Funds. It is a profit-making enterprise which facilitates transport in Athens, carrying over 650,000 passengers per day, with a 99.8-99.9% delivered services rating, and with a passenger satisfaction rating over 82% in 2006 (the last year public figures are available).

The Egnatia Motorway is being built with funding from the Hellenic Public Investment Progamme, the EU Community Support Framework and the European Investment Bank. Individual road sections are contract and built on a BOT basis (build-operate-transfer). It is managed by an independent company on a profit-making basis, and will almost certainly be listed on the Athens Stock Exchange once it is complete.

I would hardly consider either of these two projects to engender a false sense of progress, and certainly have nothing to do with the 1950s news reels you mention. I use both the Egnatia Motorway and the Metro on a regular basis, and am quite happy with the result.

You further state that:

Of course, no politician is willing to do the hard thing like liberalizing the markets, cut taxes and finally stop hiring any more people in government.

In fact, the current government has made several steps in all three areas:

Market Liberalisation
Following EU common market organisation regulations, a number of sectors have been fully deregulated, including aviation, shipping, banking, telecommunications, electricity generation and transmission, etc. If you follow the news in Greece, you will see that the ports of Pireaus and Thessaloniki are currently being privatised, leading to extensive strikes of the dockworkers’ unions, while DEH, the Public Power Corporation, is considering a strategic alliance with Germany’s RWE. The share of the government sector in total GDP has been falling, while at the same time government stakes in companies listed on the Athens Stock Exchange (such as OTE) have been falling (this is a process begun under the Simitis Government). Last year, Greece attracted EUR 4.3 billion in foreign direct investment, about 2% of GDP. The entire story of the past 4 years has been one of liberalisation, as any objective observer of events would confirm.

Cutting Taxes
In fact, taxes have been cut under the Tax Reform Law of 2004, and I can confirm this in practise from my registered company in Greece as well as my personal income taxes. The corporate tax fell from 35% to 25% in stages (in 2008, we are paying 25%), while the tax-free threshold for personal taxes rose to EUR 12,000 per person per year. The personal central tax rate will be reduced to 25% from 30% between 2007and 2009, while the tax brackets will be raised. In fact, direct corporate taxation for a limited liability company is much lower in Greece than in the United States, especially if you combine Federal and State income taxes.

Stopping Public Sector Employment
Under the Karamanlis government, there have been a number of initiatives to slow and reduce public sector employment, ranging from early retirement packages to the use of temporary contracts in the public sector (as opposed to permanent employment). The highest year of public-sector employment was 2001 during the Simitis years, when public recruitment reached a high of 58,510 new employees. Since then, the figure fell to 41,231 new recruits, and is scheduled to fall further through the implementation of e-Government initiatives: 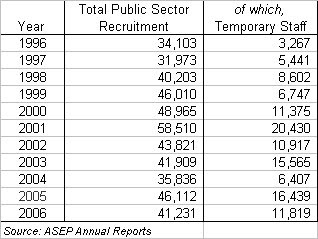 Your comment on the Olympic Games is inexplicable. You state:

Well, if you spend 11 billion euros you'll eventually get something out of it. But you only have to see how other counties –for instance Australia - benefited from their Olympic Games to realize the poor job we did despite all the billions spent.

I’m not sure what numbers you are using. The final budget reporting in Greece for the Games themselves is $ 11.6 billion, of which $ 1.39 billion was spent on security, involving the assignment of 70,000 police and soldiers to provide security at Olympic sites, and an additional 35,000 people guarding railways and borders. Sydney did not have to spend this amount, because of events you are well aware of as a New Yorker. Furthermore, Greece had to make a number of additional expenses Australia did not have to: the number of sport events was at a record high, leading to much higher investment in venues such as a rowing centre or baseball field which Greece has no use for after the Games. The Games did not occur in one city, but all over Greece. The number of official visitors (press & official), athletes and visitors attending the Games was at an all-time high. You can't compare the Sydney and Athens Olympics on a like-for-like basis.

Furthermore, you don't present any factual evidence that Greece has done badly, apart from simple conjecture. Have you factored in the positive effects on tourism and real estate values since the Olympic Games? Are you using inflation-adjusted statistics? What numbers do you compare between the Athens and Sydney Olympics, and how much time has elapsed, which enable you to conclude that we did a poor job?

Your comment on EU Assistance is again again off the mark. Thanks to steadily high growth, the current 4th Community Support Framework will be the last in which Greece qualifies as an Objective 1-2 country. The next strategic planning framework, after 2013, will see far lower amounts of EU assistance, since Greece has achieved a significant rise in GDP per capita. Your representation of GDP being driven by EU funding is wrong – I suggest you see the actual absorption rates of EU funding versus general GDP growth per year, and you will see that EU funding is less than 1% of real GDP.

You also don’t seem to understand that EU assistance under the Structural Funds or Common Agricultural Policy is not confined to Greece alone: these are support programmes given to the entire European Union. Even Germany and Britain benefit from such programmes. Yet your viewpoint seems to be that because Greece is absorbing its funding commitments, it is doing something wrong, which is frankly absurd.

Your comment on Public Sector Borrowing is correct in that it is high, but you ignore that fact that Greece is committed to achieving a balanced budget by 2010, that both borrowing and public debt as a share of GDP have been steadily falling since the debt was re-adjusted in 2004-2005 to account for military expenditure, and that there are a number of initiatives underway to reduce debt and raise revenue from one-off and recurring items. Your depiction of the Greek economy as being based in “international liquidity” (?) and EU subsidies is simply wrong – you’d be much better off checking any serious source (IMF, World Bank, Ministry of Finance, Economist Intelligence Unit) for the correct structure of GDP.

The Kathimerini article you refer to merely supports my point: this is the first government that is making a concerted effort at fiscal consolidation and discipline, particularly over the semi-governmental organisations. This is a hang-over from the previous, patronage system of development, and to his credit, Mr. Alogoskoufis is trying to reign them in, and hopefully privatise or close some of them. OSE (the railroad organisation) and Olympic Airways are the two largest loss-making organisations. As bad as the situation is now, it was far worse under previous administrations, and this government is trying as best it can to solve the problem.

There are a number of other liberalisation and competitiveness initiatives underway which you may be aware of, but did not see fit to comment on:

• The role of Public-Private Partnership (PPP) funding for infrastructure is increasing. There have already been EUR 6 billion worth of contracts signed, and this will increase over the next 3 years.

• A new Education Law has been passed. While hardly ideal, it’s a vast improvement over the old situation. Much remains to be done.

• E-Government and e-Learning initiatives are growing. Increasing numbers of transactions in the private sector and with the government are being done online. While overall ecommerce spending and internet penetration remain low, growth is rapid, and the 4th CSF should see a rapid increase in both segments.

• FDI and privatisation income are either increasing or remaining at strong levels. There is a high demand for Greek government bonds – every offering is over-subscribed.

• Tourism will continue its high growth pattern. A number of large investment projects have been announced in Crete and the Peloponnese, and many have received approval and are under construction. The Olympic Games has played a major role in the branding and positioning of Greece on the tourism map.

• The National Health Service is being restructured. Transparency has been introduced into public procurement in this area, leading to a fall in procurement costs and improving efficiency.

• For the first time, all property and transactions recorded by social insurance funds are being put online, again enabling transparency.

• The number of NGOs, companies with Corporate Social Responsibility (CSR) programmes, and volunteers is rising year after year. This shows the active engagement of civil society in productive ways.

Of course, many things need to be improved – no one doubts this. And of course there are future challenges which make the need for reform all the more urgent. Efforts are being made. But I am struck by the fact that you see nothing positive at all in Greece, except the idealised past.

If you do love your country, as you claim, then you may reflect that your country would be better served by a fair and balanced representation of the facts, rather than a dismissive reinforcement of stereotypes. Simply trashing the efforts of an entire country, and ignoring the real efforts made to improve things is a strange way of expressing an opinion.
Posted by Unknown at 13:43