Healthcare and the US Federal Debt

The immutable chasm between campaign promises made by the Obama campaign and the public finance of the United States is becoming clearer for all to see. If the United States continues along its present path, drastic tax measures will be needed to correct a rapidly-deteriorating situation.

This is not to say I am against healthcare, or against Obama: I believe in both public healthcare (and public social security in its wider sense), and voted for Obama. But it has been clear for a long time that the promises made by the campaign cannot be financed, or at least not financed easily. (See my blog post: "Yes we can" or "No, we can't afford it?" of June 22nd, 2008).

The Obama campaign has been consistently working on a baseline assumption that public healthcare would cost between $ 600 – 700 billion over 10 years to introduce. Let’s set aside the fact that there have been few public programmes which stay within funding limits, and take some simple numbers into account. Assuming $ 70 billion in new funding per year (or $ 700 billion over 10 years), and applying this to 70 million patients using the system in the same year, provides a new expenditure of $ 1,000 per patient. This is a very low number taking into account (a) Americans already on subsidised Medicare/Medicaid, who would be expected to take advantage of the programme, (some of these patients will indeed become ineligible for Medicare/Medicaid) and (b) a certain portion of uninsured Americans who would be expected to take advantage of a hitherto unavailable benefit.

The Congressional Budget Office estimates that the 10-year cost of HR 3200, or the America’s Affordable Health Choices Act of 2009, would reach $ 1,042 billion by 2019. Taking into account cost savings and added revenue foreseen by the Act (which are questionable), the net debt added to the US federal budget is $ 239 billion by 2019.

Let’s face it, this is a bargain: if the US can achieve some form of public healthcare for only $ 239 billion in total debt by 2019, it will be nothing short of a miracle. My own estimates are much more pessimistic. Healthcare costs everywhere in the OECD are rising due to older populations and a fundamentally unhealthy lifestyle: in the US, we have to add the cost of medical malpractise and sky-high salaries as well.

The CBO estimate, it should be noted, assumes that HR 3200 will extend health insurance to about 37 million non-elderly people who do not have it, leaving about 17 million (of which about one-half of which are illegal immigrants), without health care.

But if a country of over 300 million can get public healthcare for an added $ 239 billion in debt over 10 years, it’s a no-brainer: the country should go for it. In contrast, the US spends over $ 600 billion per year on defence, not counting all costs associated with the military engagements in Afghanistan and Iraq, and their legacy costs.

The problem is not so much the costs of healthcare, but the total costs (and obligations), and the revenue forecasts that underpin them:

• Both the 2009 and 2010 budgets are based on optimistic forecasts for unemployment, tax revenue and GDP growth. Most analysts forecast a far higher public deficit than currently forecast.

• Federal debt, already over $ 11 trillion, will stretch towards 85% of GDP in the next 2-3 years. Any change in interest costs, which is likely, will substantially increase the cost of financing the debt, and may cause significant problems with economic growth, as explained below.

• The federal debt number most often quoted in press reports does not include unfunded or under-funded state budgets and over-optimistic assumptions on the municipal, state and federal pension endowments. The recent budget problems in California, which is facing an annual deficit of some $ 36 billion and does not count the money already “raided” from pension funds, is a case in point.

The CBO Budget and Economic Outlook, 2009-2019, published in 2009, includes an estimate of gross federal debt and GDP growth. These forecasts were released before the full impact of the credit crisis was known, and without a full accounting for the stimulus packages and healthcare costs which have since been allocated, or are in the process of allocation.

In this forecast, debt rises to $ 12.9 trillion in 2011, versus a nominal GDP of $ 15.14 trillion, for a debt-to-GDP ratio of 85%. Under CBO forecasts, the debt-to-GDP ratio steadily falls reaching 72% in 2019. This scenario, while hopeful, is certainly over-optimistic barring a sudden change in taxation or expenditure. To put it bluntly, a major change would have to come to the Washington policy-making system to see the debt fall to these levels. 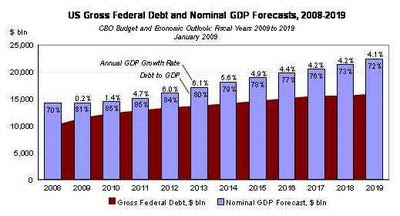 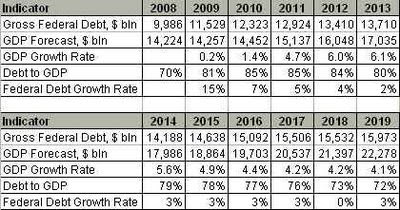 The CBO clearly points out the problems inherent in expanding public expenditure:

Under current law, the federal budget is on an unsustainable path—meaning that federal debt will continue to grow much faster than the economy over the long run. Although great uncertainty surrounds longterm fiscal projections, rising costs for health care and the aging of the U.S. population will cause federal spending to increase rapidly under any plausible scenario for current law. Unless revenues increase just as rapidly, the rise in spending will produce growing budget deficits and accumulating debt. Keeping deficits and debt from reaching levels that would cause substantial harm to the economy would require increasing revenues significantly as a percentage of gross domestic product (GDP), decreasing projected spending sharply, or some combination of the two. CBO: The Long Term Budget Outlook. June 2009.

Remarkably, the CBO forecast does not include liabilities incurred by Freddie Mac and Fannie Mae: it appears to assume that these are long-term liabilities that will be repaid. I am not wholly convinced of this viewpoint: provisions should be made for mortgage losses and credit write-downs. Similarly, TARP funding has been costed based on cash flow, rather than total allocation. Although some income should derive from both Freddie/Fannie and TARP as obligations are repaid, it is clear that counting this on the debt balance sheet would greatly (if temporarily) increase total Federal Debt.

So what does our political crystal ball read?

• By 2011, President Barack Obama will be facing a re-election campaign with a debt-to-GDP ratio of at least 90%.

• High annual deficits and a high total debt will cause interest rates on Treasury Bills to rise. The cost of debt service will rise commensurately: rather than being available for investment, US investor money will be increasingly put into government debt. The CBO uses a 10-year T-bill benchmark rate of 4.8% in 2011: I estimate this at 5.2-5.5%.

• I doubt the trade deficit will have changed much in underlying terms. Given high annual budget deficits, high public debt and a continuing trade deficit, the US dollar will likely continue its devaluation. A USD:EUR rate of 1.6-1.7 is likely.

The US economy can continue to function with debt-to-GDP at 90%. But eventually, the costs of debt service will become prohibitive, and serious cuts in public expenditure will be needed, together with a broadening of the tax base. Taxes on high-income individuals and companies will have to increase.

Serious reform is needed: the sooner it starts, the better. Unfortunately, I do not expect any serious moves in this direction until after the 2010 Congressional elections, but which time it may be too late.
Posted by Unknown at 18:07

Email ThisBlogThis!Share to TwitterShare to FacebookShare to Pinterest
Labels: US Economy