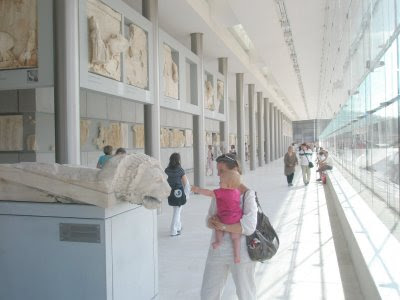 The Parthenon Floor
The new Acropolis Museum in stunning. I can't remember being in a museum which links the interior space (the exhibits) with the outer space so uniquely. The Propylea is magnificent. It recreates the sense of grandeur and anticipation that the original must have to anyone entering it 2,450 years ago. 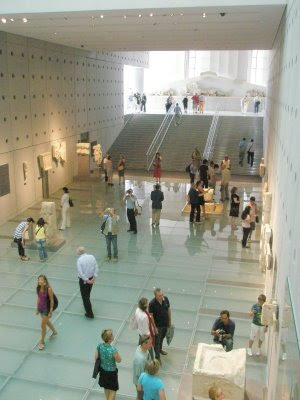 The Propylea, viewed from the Caryatid Porch

The Archaic Hall is impressive, but needs more contextual work: There are many exhibits, remarkably within touching distance, but background information and some kind of context is needed. The exhibits are, of course, amazing, as is the setting: a sunlit room facing the Acropolis. 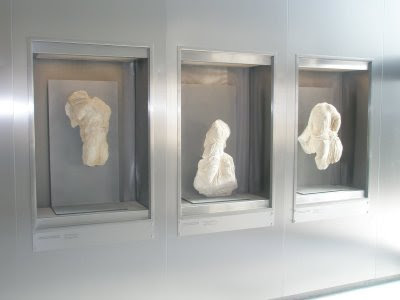 Exhibits, Archaic Floor
The Parthenon Hall is incredible, but surprisingly the impact of the frieze, metope and pediments is limited. While the space is astounding, the fragments are difficult to piece together, to envision as a whole. There is simply too much for the human eye/brain to take in and process. Certainly, you can’t absorb it in the first visit: more time, more experience is needed.

Unless you really understand something of Greek mythology, the artistic ambition of the original monument is difficult to grasp. I have a feeling that seeing it up close in this way will inspire a totally new approach to the way history is taught. 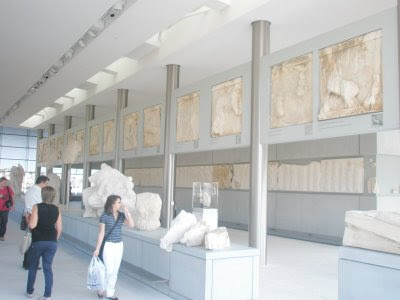 On the other hand, you can clearly see the scale of the monument. The Parthenon floor is built around a display at the scale of the actual building. Apart from the Pergamon Museum (specifically the Market Gate of Miletus or the Pergamon Altar) or the Met's Temple of Dendur, I can’t think of an equivalent installation. And, of course, the exhibits in Berlin or New York mentioned are thousands of kilometres from their original settings.

The Caryatid porch has been discretely reproduced on a quiet balcony overlooking the Propylea. I remember falling in love with the Caryatids in the old Acropolis Museum. The impact here is somehow more limited: the perspective is different; the visitor’s eye is overshadowed by the Propylea itself. Perhaps this recreates the impact of the original monument?

At the old museum, I recall thinking that these were the most graceful figures of women every sculpted by human hand. Here, in the new museum, I felt they were closer, and the weathering were much more apparent. This does not in any way detract from them, of course, but the closeness or proximity of these masterpieces requires the eye to see them in a fundamentally new way, compared to their older setting. Does familiarity indeed breed contempt? 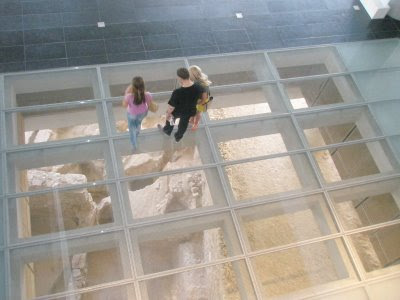 Entering the Propylea. The glass floor allows viewing of the sub-terranean antiquities excavated during the construction of the museum.

The effect of splitting the collection between Athens, the British Museum and other locations (or of lost fragments) is well illustrated. I can’t think of a better reason for returning the “Elgin marbles” from the British Museum to the Acropolis Museum. Any visitor needs to see as much of this monument in its entirety as possible. The arguments given by the British Museum – that this permits a comparison with other great world cultures, or that it is more accessible in London – are rendered invalid by the unique setting and the need to maintain the cohesiveness of the exhibit. I won’t even get into the supposed legal justification for Lord Elgin’s removal of the piece. The marbles should come home to Athens – now. 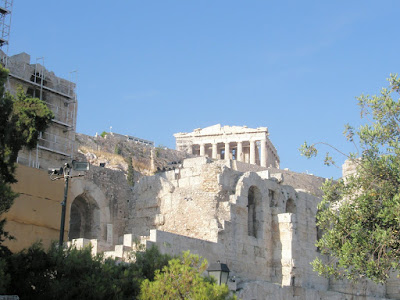 The Parthenon, viewed from the Herod Atticus Theatre

I enjoyed the short multimedia exhibition, which does so much to explain the Acropolis’ history. This could usefully be supplemented by more detailed multimedia exhibit on touch screens elsewhere in the museum. In particular, the Propylea and the Erectheion, which don’t receive the attention they should.

The indoor and outdoor café is an excellent idea: you can drink coffee or something stronger looking out at the Acropolis. The grounds are immaculate. Unlike many other museums, this one has room to wander in. 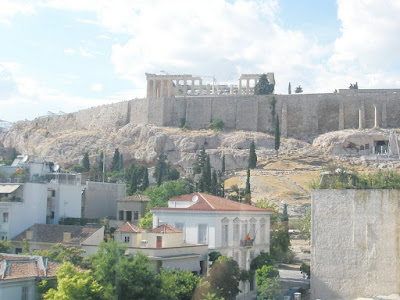 The Parthenon, viewed from the Museum roof cafe

One thing I really appreciated: the exhibits are literally a finger’s touch away. They are immediate, proximate. In the old museum, they were typically behind glass, or raised on pedestals. Here, they are literally right next to you. Beware the impact of changing perspective: I’ve gotten so used to seeing them in the old museum, that a totally new approach is needed for seeing them in the present, new one.

I strongly recommend anyone visiting Athens visit the new Acropolis Museum. It’s an architectural masterpiece in terms of its functionality of linking the exhibits to the monument itself, and making the exhibits accessible.