I am a tax evader

I hate to announce this news in public, but … I am a tax evader.

I evade paying both VAT and social security taxes when I hire a cleaning lady to clean up my mess one day per week for my house in Athens. She is legal-I tried-but she doesn’t know how the system works and doesn’t have a book of receipts.

I evade paying VAT and real estate taxes by under-declaring the number of usable square meters and actual loan volume in my house in Athens. In fact, the bank that’s given me the loan helps me in this, as does the Hellenic Tax Authority (the Eforia) through its advice. Honestly, I tried to do it, but if I had declared the true number of square meters (developed by the previous owner), the house would probably have to be torn down and re-built.

My complicity in not demanding receipts from the laiki (farmers’ market) seller when I buy my tomatoes, or from the taxi driver when I take a taxi into Athens, makes me an active participant in VAT and income tax avoidance (of the vendors).

I’m a little bit behind in my TEBE payments…actually some months behind. But I never use the service, don’t understand its benefits, and whenever I have a question I don’t get any answers. Nevertheless, I’m going to catch up this week…or next.

On the other hand, I pay my income tax assessments, declare my income, and when VAT needs to be collected from third-party suppliers in Greece, I collect it and pay it.

Which lead me to my ultimate conclusions: the tax system simply doesn’t work. It’s irrational, and creates too many incentives for tax evasion or avoidance.

Let’s take the real estate tax as an example: in Greece, a real estate object is taxed on the basis of (a) the number of usable square meters, and (b) an “objective value” (minimum value) per square meter.

When you go to buy a house, you immediately determine three things:

(a) the previous owner has made changes to the approved building plan, such as by enclosing balconies, but not declared this to either the Town Planning Authority (Poleodomia) or to the Tax Authority (Eforia), and

(c) Sellers, buyers and banks are all implicated in this cheerful deceit, even to the point of the banks making off-the-books mortgage transfers to sellers on behalf of buyers.

When government-owned banks start setting up secret accounts to cheat the government from tax revenue, you know there’s a problem.

The whole tax system is a classic case of treating a symptom rather than a root cause. The symptom is tax evasion: in order to combat this, the government has passed hundreds of laws and amendments trying to “fine tune” the system. The result is continuing, rampant tax evasion. I doubt any politician in Greece, or any citizen, can boast that he or she is in 100% compliance of the law. Even the ones that want to.

So the question is, why continue this system? What’s the point of spending hundreds of millions of Euro on antiquated compliance systems which create bureaucracy and paperwork, slow down productivity, and result in a culture of petty corruption and tax avoidance?

I suggest we start to think of basic ways to fundamentally reform the system. I’d start with the following:

(a) Eliminate VAT on any transaction where the main input involves labour. Thus, any professional activities which depend on manual, hourly labour, such as cleaning, construction, market vendors, taxi drivers, waiters, cooks, etc. should not be taxed with VAT. This does not cover professions with a high degree of specialization, such as architects, accountants, lawyers, etc., who should pay taxes under the Personal & Corporate Income Tax Bands (see below).

(b) Levy a flat tax of EUR 750-1,000 per year on all manual trades. No other taxes on personal income, earned by own personal work, should be required. However, if a manual worker has income from other sources (e.g. rental of an inherited apartment), this should be taxed under the standard Personal and Corporate Income Tax bands (seen below). 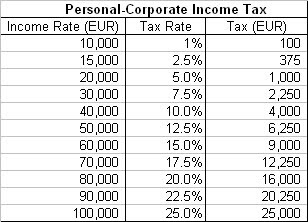 (d) Social taxes on employment and earned income (e.g. professional services) should be levied according to a 1% band, starting at 1%, and rising as follows: 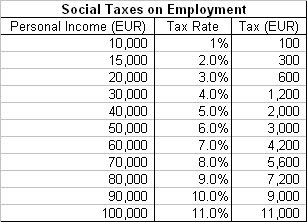 (e) Levy real estate construction or sales taxes on a 1% tax band . These taxes apply either to construction of a new property, or sale of a property, but are only levied once. The maximum tax rate is 10%. This same tax applies to commercial or residential projects. There is no VAT on construction activity, although a form of VAT on construction materials will be set. (This rate does not apply to annual municipal taxes on property). 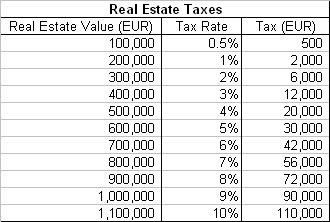 All taxes are based on a professional valuation conducted by a qualified surveyor who is employed by a bank or, in the cases where a bank is not involved in financing, by the tax authority. The valuations of each surveyor will be evaluated separately by a separate branch of the tax authority. Banks cannot provide mortgages unless the buyer or seller provide evidence that the real estate tax has been paid.

(f) Remove complicated taxes for real estate. The only restrictions on real estate in the future will be (a) the building coefficient in terms of total area built, (b) the height of the building and its relationship to the buildings on either side, and (c) energy efficiency, seismic safety, etc. If an owner wants a building with no balconies and 100% internal floor space, it’s up to him. The process of evaluating the “usable” living area and assessing a value on this should be eliminated.

Adopting these bands will create an immediate loss of apparent tax revenue in the short-term, as well as a long-term revenue loss over time. Such a loss must be alleviated in two ways:

(g) Increasing “sin” taxes on alcohol, nightclubs, cigarettes and certain other categories of products and establishments. For instance, cigarette prices are clearly far lower than European norms, and cigarettes are a direct contributor to cancer and adverse health effects. A special health tax on cigarettes of EUR 1 / year should be added until the average price per pack reaches EUR 7.00/pack in 2014. (See table below).

(h) Enforcing the existing tax law on certain categories of establishments and professions, where tax evasion is standard operating procedure. More on this in a future post.

An example of re-calibrating the “sin tax” on tobacco and cigarettes is seen below. In 2009, assuming an average price for a pack of cigarettes of EUR 2, and an average tax rate of 74% of that tax, means that the tax per pack is EUR 1.48, and the total tax which should be attributed to government revenue is EUR 2.48 billion.

Under my proposal, the price per pack would rise by EUR 1 per year until 2014. The large majority of this price rise would comprise tax. I’ve assumed a 4% increase in the product price; by 2014, a pack of 20 cigarettes would cost EUR 7.00 to buy (which is similar to high street prices in France and Germany today). I estimate that consumption would fall by about 500 million pcs per year. Tax revenue to the government would rise to EUR 9.87 billion. This is nearly 10% of the regular 2008 central government budget.

A "sin" tax of this sort has several collateral benefits: According to the European Commission, Greece has the highest smoking rate in the European Union. Approximately 600 deaths are caused per year from passive smoking; approximately 20,000 per year from active smoking. Reducing the number of smokers would have a positive impact on national public health, while remaining an individual decision as to whether (and how much) someone should smoke.

This tax should be earmarked for shoring up the public health system and pension funds, replacing in part the funds currently collected through high IKA and other payroll taxes. Lowering the payroll taxes should in turn have a positive impact on employment, as people understand that they can keep a higher share of earnings, and employers do not have to count on high payroll taxes in employment.

This proposal does not answer several key questions in Greek tax policy today:

• How to enforce the true recording of income (receipts)?
• Whether the amount earned through indirect taxes will replace the taxes currently payed by a limited number of taxpayers (usually salaries employees)?
• Whether the Greek people will finally respond to positive incentives and assume their legal responsibilities?
• Can these ideas be implemented under EU VAT and tax law?

However, I firmly believe that we need to simplify the tax system and remove as many taxes on labour as we can, particularly for the low-paid, manual trades which are necessary in the Greek economy, and have made Greece a labour magnet since the Soviet Union fell.

Additional posts will be dedicated towards answering some of these questions. But the system needs fundamental renewal, not on-margin tinkering. It is doubtful whether any current political party is prepared to address this issue.
Posted by Unknown at 13:24