Will there be a real economic audit this week?

This week, officials from the “Troika” of the European Central Bank, the IMF and the Eurozone are due in to begin an economic audit designed to monitor progress on ’s EUR 110 bln bail-out package.

The PASOK government has launched a critical, even historic round of reforms, in agreement with the Troika. If implemented correctly, these reforms will greatly improve the Greek fiscal situation and part of its competitiveness.

They will not, however, be enough in themselves to assure ’s longer-term survival and competitiveness. Indeed, unless the EUR 110 bln package is extended in 2012, will again face a difficult lending situation, and will probably have to default without a further debt renewal.

This will be the subject of a future post. What I am most concerned of today is the fact that although the government is moving in the right direction, it is not moving fast enough, and it is clear that it will not meet many of its targets in the agree time frame.

Let’s take the budget progress as an example: according to the 5-month budget estimate published by the Government Accounting Office, the total deficit “fell” from EUR 14.65 bln to EUR 8.97 bln in the first 5 months of 2010 versus 2009 (all figures in EUR mln). 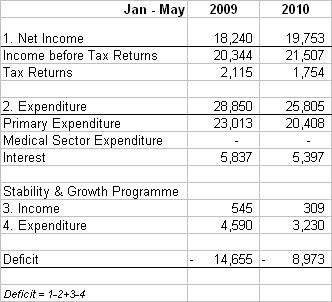 This is undeniable progress. However, both the income and the expenditure lines are “skewed”:

· The government has decided to delay return of VAT to September 2010, unless tactical audits are undertaken. This means that the “Tax Returns” line of “income” is artificially low.

· Several items of “Expenditure” are not reported:

a. The government has put off paying medical sector debt. It is currently locked in negotiations with pharmaceutical and other providers over its proposal to pay recent debts, from 2007 onwards, using Greek government bonds.

b. The government has not counted the retirement cost package of Olympic Airlines, which has a total price tag of EUR 1.3 bln, and which apparently will, despite previous declarations to the contrary, be paid. It is unclear whether this will be booked to the central budget, or towards the insurance funds.

c. The government has not paid a large number of state employees on temporary contracts, such as teachers, medical assistants, social workers and firefighters, for several months.

d. A large range of government ministries have delayed payment to private sector organizations for services provided. Perhaps the most famous example of this is the Hellenic Tourism Organisation (EOT) / Ministry of Tourism, which is rumoured to owe several hundreds of millions of Euro in debt for previous years’ tourism promotion campaigns.

This budget is therefore open to serious questions. What we see here is probably the “massaging” of data to fit into the terms of the Stability and Growth Agreement. Yet this creativity will unfortunately not make the debt go away. needs more time to consolidate its public sector accounts, and it would be better to be fully honest with its European partners and with the Greek people.

Unfortunately, such full honestly would result in yet another firestorm on European sovereign debt markets. So I can understand if, by the end of this week, the Troika announces itself satisfied with the progress of the SGA and releases the EUR 9 bln tranche.

This causes new questions to arise:

· Moral Hazard: Will the Troika become a willing accomplice in concealing the true measure of Greek debt?

· Medium-term Impact: What will happen in 2012-2013, when the EUR 110 bln package expires, and needs to turn to the markets to refinance at least EUR 60 bln in sovereign debt?

The changes that is making are necessary and long overdue. Some of these, such as the first national inventory to formally record how many people actually work in the Greek public sector, indicate the pathetic state of the latter.

The Troika should insist on close monitoring, but perhaps increase the amount of lower-cost funding as a form of incentive payment for meeting budget conditions.

Otherwise, we are all deluding ourselves. Let’s not forget that of ’s EUR 310 bln debt, the maturity was approximately 8 years in total last year. Given the economic crisis that began in 2010, each year will bring a lower maturity at a higher interest rate. Assuming the total debt reaches a minimum 5% rate, Greece’s annual interest rate costs alone rise to EUR 15 bln, which will far outweigh the total savings imposed by the SGA in the next three years.

Forecast of Greek Debt to 2015