A Brief Comment on Greek Polling and the June 17th Election 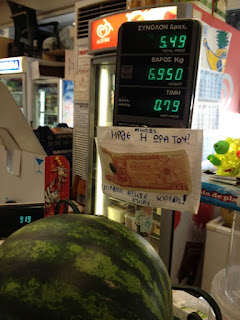 The sign with the hundred drachma note in our neighbourhood grocer asks "Perhaps its time has come?"

The second parliamentary election in Greece will be held one week from today. Several Greek parties held general press conferences today, while most print and broadcast media as well as online channels are understandably focussed on this event.

There are two points regarding the upcoming Greek elections which I believe will be crucial for understanding the outcome: the interpretation of pre-election polling results, and actual voting on election day.

In terms of pre-election polling: Most public polls show a lead for New Democracy over SYRIZA by about 1.5-2%. My understanding is that confidential polls ordered by New Democracy show much the same result.

Why is voter expectation important? In the United States Presidential elections, for instance, voter expectations are thought by some researchers to provide a more accurate prediction of electoral outcomes that voter intention (see Rothschild and Wolfers: Voter Intentions versus Expectations. Wharton Business School). Testing for voter expectation is also a subtle means of reducing subjectivity, as it requires the respondent to forecast a generalised result, rather than an individual preference, as well as to account for potential imponderable or intangible factors, such as voter motivation.

This second point, voter motivation, is quite important for interpreting events on polling day. To put it mildly, I see very little “grassroots” activity by the two major parties, PASOK and New Democracy. In contrast, SYRIZA, KKE and Chryssi Avgi appear to have very motivated ground operations in Athens. My evidence for this is anecdotal, but nonetheless significant:

·    For one week now, SYRIZA has been airing television advertisements on nearly all major channels. SYRIZA also has been buying billboards, not least of which are in bus stops—a clever move, given the likely demographic-political background of voters targeted by these adverts.

·    For two weeks now, there have been any number of small public gatherings by SYRIZA, KKE and Chryssi Avgi in the north-eastern suburbs of Athens, as well as in the centre. On the road to Marathon, for instance, each weekend there are groups of activities handing out fliers. In the centre, I have seen Chryssi Avgi marches in small but visible numbers, as well as SYRIZA events.

In contrast, I have seen no new media or ground operations by the two mainstream parties. This may be due to economic reasons—it is well-known that both parties have a debt of over EUR 250 million. But I believe it is also due to the fact that in the case of PASOK, the party is collapsing with the flight of unionists and other activist members to SYRIZA, while in the case of New Democracy, there appears very little that can be done on a mass movement scale in the main cities. In contrast, ND leader Samaras is on a tour of regional cities, where he polled higher in the May 6th elections.

The conclusion of these observations is that:

·    A get-out-the-vote (GOTV) operation this Sunday will be crucial to success. In this respect, I expect SYRIZA to have the edge, because they appear more motivated and more organised in terms of sheer numbers and rage, particularly among younger voters.

·    A major factor in determining whether “undecided” voters vote will be the weather. In the May 6th elections, approximately 30% of the electorate did not vote. Given that summer weather has arrived, I expect that this number may remain stable or may increase, and that this too will be in favour of SYRIZA.

·    Finally, a main factor before the elections will be the element of rage. This is turning into a main campaigning tool of ND, SYRIZA and Chryssi Avgi, and is leading to different kinds of scaremongering and negative PR in an effort to motivate their respective party voters.

The economic situation is Greece is worsening dramatically. While seasonal employment may rise during the summer tourist season, all long-term macroeconomic and microeconomic indicators are worsening. In this economic depression, a second election is being waged which is resulting in a greater polarisation between voters and unrealistic expectations being created through shameless demagoguery and mistruths on all sides of the ideological spectrum.

The determinants of this election will be the weather, the share of non-voters and the extent to which the parties can motive their supporters to vote on election day. These three points indicate that there may be a higher probability of a SYRIZA victory than what may be expressed in the polls to date. (This may change in the last week of the campaign, which we understand will be vitriolic).

The problems of economic and political governance remain, and will be amplified by the very tactics used in this election, as well as by the intractable political and social issues of Greek society and the Greek state. Political fragmentation and divisiveness have been embedded at a systemic level: it is doubtful that any single party, or coalition of parties, will have the political unity necessary to pass through the structural reforms that Greece so urgently needs. It would also appear that this fragmentation will last for a significant period of time, leading to inevitable economic consequences.

To put it bluntly, one could conclude that these elections, or rather the political activities which define the inalienable democratic right to an election, are contributing to the problem rather than to the cure.

Philip Ammerman is Managing Partner of Navigator Consulting Group and European Consulting Network. He works in the field of investment management and due diligence in Europe, the former Soviet Union, and the Middle East.