Reflections on a Night in Athens 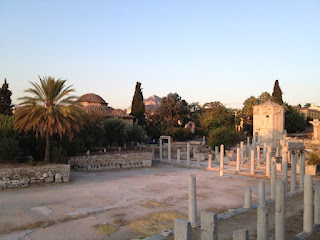 The Tower of the Winds and Lycavittos

Yesterday evening I took the Metro to Syntagma Square and from there walked down Ermou Street into Monastiraki and Plaka. It was one of those typical mid-summer Athens evenings, where luckily the temperature was not too high. There were a good number of people out, tourists and Greeks, enjoying a Saturday evening and the mild weather. The Olympics were on flat screen TVs everywhere, but few people were watching. In Thisio, the Nigerian fake Vuitton brigade was out in force, as were panhandlers and peddlers of all kinds and nationalities.

One of my favourite walks is from the Roman Agora up the northern flank of the Acropolis to Theory Street, and from there westward to the main entrance of the Acropolis, then down to the Herod Atticus Odeon and Dionissiou Areopagitou Street. It’s not something I often have time for, but yesterday evening turned into one of those stolen moments in time, when life went from the unending series of deadlines and commitments to an evening of freedom for reflection.

Let me preface my writing with the fact that this is the section of Athens which the Municipality and various government ministries, particularly the Ministry of Antiquities, do their best to preserve. The historical responsibility as well as the seriousness of successive generations of political administrations should not be in doubt. So when discussing this area, we are discussing the “state of the art” as regards Greek and to a certain extend European cultural heritage. Their success is reflected in the fact that millions of people, Greeks and tourists, visit and work in this tiny area every year, without major damage to historical monuments which are an integral part of Greek and world civilisation. 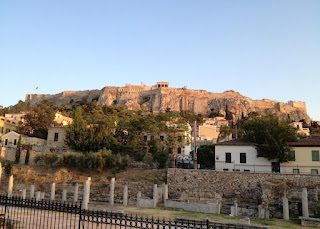 The Persian Menace
As you look up at the northern curtain wall of the Acropolis, just to the left of the Erechtheion, you see the remains of column drums from the Old Temple which were used to rebuild the wall after the Persian destruction of Athens in 480 BC. Legend has it that Pericles placed these columns there to remind Athenians of the dangers of complacency and as a reminder of the Persian threat.

I often wonder what equivalent reminder Greece should place as a reminder of the dangers of domestic political corruption and the morally bankrupt statist approach behind the present debt crisis and in the very real “occupation” of the Greek state. It has always been easier for Greece to rally against a foreign invader: it has always been more difficult to manage the Greek polity in times of peace. This fundamental challenge is no closer to being resolved today than it was in the days of the Peloponnesian war or the power struggles of Periclean Athens. 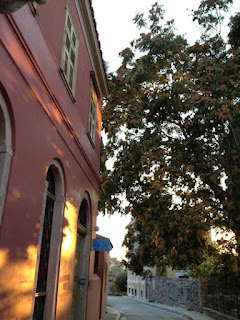 The Squandered Legacy
A little way further up the hillside, Polygnotou Street takes you to the right, where the Agora lies slumbering. The Melina Mercouri foundation building is on the left. This part of the centre reflects the squandered legacy of what could be. Magnificent buildings lie in ruin. Others have been taken over to house a vast apparatus connected with the Ephorate of Antiquities or the Ministry of Culture, which I have never in my life, night or day, seen to actually operate. There are private “Museums” and “Foundations” which never open (certainly not at the height of the tourist season, which would somehow be too logical); there are tens of other state buildings who’s purpose is unclear. What buildings have been renovated are defaced by graffiti or litter. It is impossible to think of the historical centre of Paris or London in the same way.

Let me be clear here: the actual budgetary cost of this is one reason Greece is bankrupt today. But the opportunity cost is far higher. 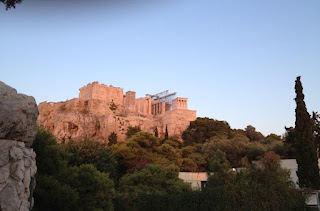 Colour Guard Retreat at the Propylea

Opening Hours
This is repeated when one actually reaches the height of Theory Street, and the entrance to the Acropolis. At 19:30 on a Saturday evening in August: the Acropolis is closed. It’s been closed since 15:00. This means that at the height of the tourist season, the hundreds of visitors streaming up the hill cannot visit a major monument to world civilisation. Instead, they can buy a bottle of ice water being sold illegally by a Pakistani immigrant.

Not a single thing stirs. The souvenir store and cantina outside the entrance are locked up. Inside the gates, a guard sits, his feet up, staring into space.

Up above, on the Propylea, the honour guard (barely visible in my photo) marches down the steps, having taken down the Greek flag. A solemn and moving moment, which none of the tourists or Greeks around me actually notice or understand.

If the Greek government could find a way to operate its monuments and physical infrastructure such as ports even half as efficiently as Public or Goody’s (both Greek companies) operate their stores, I believe the Greek state could be earning at least EUR 10 billion more in gross income each year. This is roughly half of Greece’s general government deficit, including interest costs.

Try one more thing: try to find the opening hours of the Acropolis online doing a Google search. Let me know what you come up with. 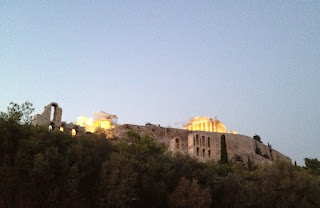 The Acropolis and the Herod Atticus Odeon (foreground)

The Empty Athens Festival
I crest the hill and walk down to the Herod Atticus Odeon. This is one of my favourite places in Athens, where I’ve seen Miles Davis, George Dalaras, Placido Domingo, Coriolanus, and many other artists and performances. To my vast surprise, it too is closed. The “Athens” component of the Athens-Epidavros festival is now over: the last performance was on July 27th. Apart from a few tourists taking photographs, the entire place is empty.

I just wonder exactly what logic is behind this. There’s good weather in Athens from May to October, 6 months of the year. The height of the tourist season is June to September. How is it possible that this place is closed? How is it possible that according to the Festival website, there were only 9 evenings of performances at the Odeon in June-July 2012? That’s 4.5 evenings per month.

Even in a financial crisis, there are ways of managing a venue to bring in revenue, particularly given the presence of corporate sponsors and tourists in a city of 4 million inhabitants. And yet, if I were to ask the receptionist at any of the major hotels we do business with, they would not be able to tell me what’s playing—because even if the “Athens Festival” had something playing, it would not have made the effort to market this via a simple email newsletter to the major hotels, embassies, companies and other potential client groups in Athens. 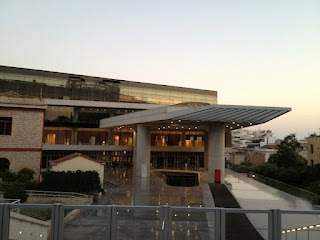 The Acropolis Museum: Stunning, and Closed

A little further is the Acropolis Museum—truly a stunning achievement. It’s closed.

Thissio
And a little further back to the north is the Thissio district, which has been turned into a vibrant café area. Tonight it’s absolutely full. There are thousands of people packed into the open-air cafes and sitting up on balconies and rooftops. The contrast with the silent precincts of the Agora or the Acropolis or the Herod Atticus could not be greater. 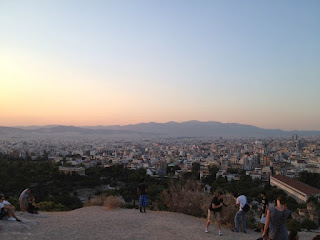 Sunset over the Agora

It is this contrast between the state and the private sector in Greece which leaves me more disappointed with each passing year. I speak now not ideologically, but based on simple comparisons and results.

·       Why is it not possible to manage world-class sites in Greece with a little more vision and commercial benefit, without damaging the site or risking exploitation?

·       How is it possible that even now, three years into the gravest economic crisis Greece has known, the Greek government is still not examining the easy alternatives to valorising Greek culture and Greek heritage more effectively?

·       Why have previous initiatives, such as the “full moon” openings, or the vast knowledge of cultural management from other countries or organisations such as UNESCO or the Metropolitan Museum or the Louvre not continued or utilised?

·       How is it possible that organisations such as Goody’s or Public can stay open 2 shifts per day, even granted that private sector payrolls and working conditions are difficult, when major cultural sites such as the Acropolis can barely manage one?

·       How is it permissible that there is no easily-detectable website for the Acropolis? When, after much searching, you actually find the “Odysseus” site of the Ministry of Culture (also paid for with EU money), how is it possible that the site is in English and Greek, but not German, French, Spanish or Russian, given that these are major tourism source markets?

·       Is it surprising that according to a European Commission study, Greece has among the lowest economic contributions from culture in the European Union (1% of GDP in 2003)? Since this is entirely under national control, what measures is the Greek government taking to improve this revenue?

·       Given that tourism is so important to the economy, and given that Greece has agreed to support EU anti-counterfeiting laws, why are there Nigerian street vendors selling fake Vuitton bags every 100 meters on lower Adrianou street between Thissio and Monastiraki? How can this possibly still continue?

Obviously, I know the reason why all this is happening. I’m just shocked and disappointed that even now, there has been no visible change whatsoever.

The Greek state is locked in its primal archetype as the guarantor of cultural goods, delivered through public sector workers and a vast network of related organisations, institutes, foundations and companies linked to the Ministry of Culture, staffed by apparently very mediocre managers (to be polite), and without any kind of strategic vision which might actually improve the situation for Greek citizens and the 15 million tourists that visit Greece each year.

In the meantime, hospitals have run out of drugs; pensioners are starving and forced into massive bureaucratic contortions to receive basic medical care; unemployment has hit 22% (but the union members guarding the Acropolis can only work 1 shift); youth unemployment approaches 50%; the government has over EUR 6 bln in unpaid bills; thousands of companies are closing; and Greece still has the highest debt-to-GDP in Europe.

We can blame many people for this situation, but I don’t blame the Persians.