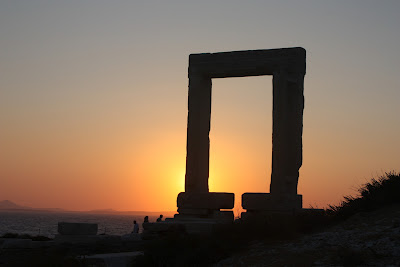 My summer vacation this year consisted of 1 week in Naxos, in a beautiful hotel on the Agios Giorgos beach just outside Hora, the main town. Although brief, it did me a world of good.

So many things struck me about what I saw in Naxos, I thought it would be worth sharing in the middle of an otherwise very bleak economic and political landscape.

Hotel Economics
Reservations were done through Booking.com, which is definitely changing the structure of tourism bookings in Greece and so many other countries. A room for two cost EUR 80 per night, including all taxes and breakfast. Taking into account the hotel night VAT of 6.5% and the Booking.com commission rate of 18%, and exempting the breakfast VAT calculation, the hotel is clearing about EUR 61.5 per night on the deal, before operating expenses. Anyone who thinks that hotel prices have not been affected by the crisis should think again.

Occupancy and Guest Mix
Nearly full. Guests from Germany, France, Italy, Austria, England and Greece, based on observation, in order from highest number of guests to lowest number of guests. Most were families. What was remarkable was the friendliness and absence of hostility. The anti-German images so common in Athenian press were thankfully absent.

Activities
Huge progress made since the first time I visited Naxos in 1998. Every hotel or bar/restaurant takes a hand in organising a concert or event at least one night per week. Our hotel had “Greek night", which meant a buffet dinner and three rembetathes (fantastic music for me, met with indulgent incomprehension but tremendous good will on the part of the foreign tourists). The beach bar on the corner organised an evening rock party on the beach, with Rolling Stones and other covers (can’t do better than that on a Greek summer holiday). Pony trekking, windsurfing, kite surfing, yachting excursions, cooking lessons, concerts at the castle, used book stores: the private sector everywhere seems to understand the need to offer activities. The public sector is, as in my previous post, almost entirely absent.

Local Products
There has been a major effort to promote and use local products. Several hotels and restaurants mention this in their menus, and actually support it judging by the ingredients used. In 1998, the only local product venues in Hora were a cheese-seller and the ubiquitous Kitro Vallindras. This has since expanded, with at least 7 retailers focussing on traditional and Greek products, and doing good business (but with limited seasonality).

Seasonality
A killer – the absolute bane of the Greek hotel and wider tourism sector. Most hotels in Naxos are open from the beginning of May to the end of September, but hit occupancy over 80-85% only in July and August. Having visited Naxos in the off-season, I can attest that nearly everything is closed before Easter and in late October. And having done any number of hotel feasibility studies, I can also attest that seasonality and occupancy are the single greatest detriment to hotel investment plans. This is the main failing of the public sector, and particularly of Greece’s national tourism strategy. Unless it is redressed, for instance through promotional campaigns, better access infrastructure, and real destination management, the Greek tourism sector will continue to operate sub-optimally in financial terms.

Hotel Infrastructure
As mentioned in a number of other posts, the problem is not so much hotel availability as it is hotel overcapacity. This is exacerbated by the fact that seasonality is so low. It would be a mistake to continue to fund new hotel starts using EU Structural Funds. The challenge at this point is to upgrade the infrastructure and services in existing hotels, which is very difficult given how some properties were built, and to expand seasonality. There needs to be a real tourism development plan for the island to address issues such as infrastructure and promotion, and there needs to be a real national tourism development / promotion plan, which is agreed to and implemented rationally.

Taxation and Tax Logic
Also operating sub-optimally. We ate at several restaurants which were giving false receipts or no receipts at all. The hotel provided us with a legal receipt for the room nights, but not for the meals. In Athens, kiosks and small stores given receipts automatically: in Naxos not at all. This is despite the taxi driver complaining about “inspections by SDOE” (the financial police). It’s also clear that in addition to reducing the 23% VAT on restaurant meals, the government needs to reduce the 44% IKA/social security tax in order to promote legal employment, and take measures to redress seasonality. Most restaurants only fill up at dinner; most probably operate successfully less than 2 months per year.

Environment & Infrastructure
Extensive efforts have been made to keep beaches clean. Limited beach infrastructure has developed: a lifeguard station, portable toilets and showers have been added. There is a lack of parking places and sidewalks. What is a very depressing is the fact that all islands visited or seen have been totally denuded of forests. This is not a new phenomenon, but on an island like Naxos, which is over 50% granite and therefore provides for fertile areas, it is particularly sad. The situation is far worse on Mykonos, Andros or other islands where the bedrock is limestone. The authorities are clearly more oriented towards Blue Flag-style beach certifications than overall biodiversity and environment.

Conclusions
The Greek islands still retain their charm: walking along Agios Giorgios beach at sunset remains an unforgettable and universal experience which transcends nationality, religion and the bitterness of the economic crisis. This natural beauty provides an unforgettable experience not just to retirees or mature tourists, but to children, teenagers and young adults.

This creates a unique opportunity to develop the Greek tourism product and its integral components the environment, architecture and culture as a cross-generational investment and responsibility rather than as a seasonal or short-term cash opportunity.

This also creates a unique opportunity to build the international goodwill needed to help Greece during this crisis as well as over the longer term.

The failure to recognise this is arguably one of the greatest failures not only of the Greek state, but of wider Greek society and the private sector. (I generalise: there are, of course, important exceptions to this).

While the private sector has made some attempts to improve the cultural and built environment (and has arguably done much to ruin it), the failure of the public sector to invest in this in a sustainable manner over the long term is incomprehensible. Development appears to take place despite public policy, not because of it, and is further undermined by the get-rich-quick mentality in the majority of the private sector.

This is not to say that the public sector has not made important investments. When I first visited in 1998, there was no health centre, and the port facilities were rudimentary. Now, a health centre is operational (with limited functionality) and the port is better-staffed with port police to handle the peak traffic periods when the large ferry boats arrive. There is a new municipality building (also built with EU money). There is a ridiculous computerised tourist information office with three touch screens (which is a total mistake in approach) and the municipality closes of the seafront street in Hora in the evenings to provide a pedestrian promenade.

But in strategic and practical respects, there is nearly no presence:

·       Information about Naxos is provided by car rental firms or travel agencies. There is no unified website or physical guide to the island provided by either a tourism alliance or the municipality. This means that basic, updated information such as bus schedules or a guide to museums of Naxos is often fragmented or missing.

·       There is absolutely no cultural interpretation. How many tourists know that Naxos has been settled since Neolithic times, and has been mentioned in both Greek mythology as well as classical history? Naxos is associated with Ariadne, yet references to her are nearly non-existent. How many tourists have visited the quirky museum in Apiranthos, which includes some of the most interesting Neolithic and Cycladic exhibits in old wooden display cases? Where is the explanation of the Venetian period of Naxos (apart from its Wikipedia entry)? Why is so much of the Castle still a ruin, and not a museum?

·       Where is the attempt to differentiate Naxos as a destination, and “put it on the map” against other Cycladic destinations? Naxos is known for windsurfing. Why not organise a Naxos Regatta or Windsurfing competition? Where is the Naxos Jazz Festival or the Naxos Cooking Week?

·       Where is the content and information a tourist or a tourism professional can use to sell Naxos internationally or even domestically? Where is a simple, up-to-date hotel guide, ferry boat and flight guide to Naxos? How many hotels have conference facilities? Where can a summer tourist who wants to re-visit the island find how many hotels are open in November during school holidays, or the following Easter?

·       Why is there no attempt to cross-sell basic information or services, such as a guide to investing in real estate in Naxos, and what a foreign investor would have to do to buy and house? This is a classic function of a chamber of commerce or a municipality, and it is totally absent: this space is dominated by real estate agents who function at various degrees of professionalism and self-interest.

·       Most importantly, if the public sector fails to address this, why hasn’t the private sector, which depends almost entirely on tourism, stepped up to fill the gap in a more objective and professional?

At the end of the day, a post-ideological analysis ignores whether the public or the private sector plays a leading role. What is undeniably necessary for the common good is to generate value for visitors and residents, while preserving and enhancing the culture and natural environment.

What is repeatedly noticeable in Greece is the failure of either side to take a collective, strategic approach to the development of such value, let alone the basic prerequisites to compete internationally. Thus, the infrastructure or services one would expect from a municipality, a tourism chamber or a development alliance are almost totally absent, despite the billions of EU funds theoretically available for such development.

Today, charm, improvisation and good will are no longer enough, while exhortations for solidarity and a large social state have clearly failed in Greece. The previous development model was based on a weak currency (the drachma), a sun-sea-sand tourist product, a Socialistic worship of big infrastructure projects, and tax evasion, and has clearly failed. It remains to be seen what will replace this, or if the voters and public officials of Greece accept that something different is needed.