“Island of Dreams” or “Island of Nightmares”: Finding Ozymandius in Eretria 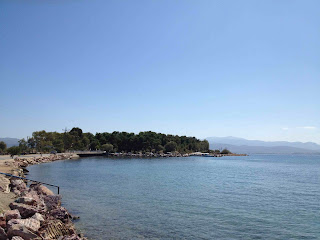 The "Island of Dreams": Pezonisi, as seen from Eretria Harbour

Readers of Greek press will recall that every so often the Municipality of Eretria announces with fanfare the privatisation of the so-called “Island of Dreams”. This is a forested island connected to Eretria town by a short causeway and bridge. The project was originally developed in the 1980s, and since then has gone to ruin.

The project was developed by a Municipal Company called the Δημοτική Επιχείρηση του Νησιού των Ονείρων (ΔΕΝΟ). DENO built a total of 46 bungalows and 52 hotel units, together with a restaurant and reception centre, on a 66,000 square meter island just off Eretria harbor. The work was extremely basic and almost no attempt was made to develop quality architecture or design. 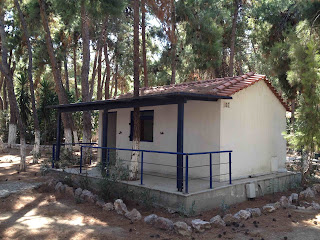 The “resort” functioned for a number of years, most recently hosting children from Russia. DENO collapsed, with over EUR 2 million in debts, and is undergoing liquidation. For the past few years, the site has been abandoned and is literally crumbling to ruin. 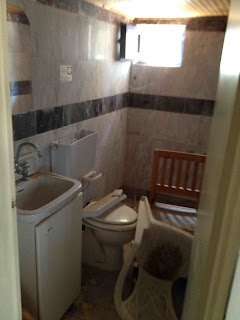 I visited Eretria in late August and took the opportunity to visit the site, slipping into the abandoned resort through a hole in the fence and spending an hour walking through garbage and abandoned buildings. This reminded me of nothing so much as some factory tours in the former Soviet Union in the 1990s. 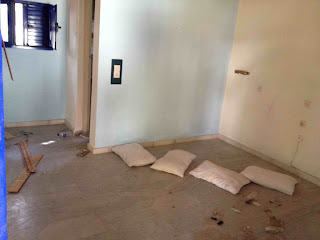 The present situation is unacceptable in too many ways, and this site may in fact illustrate exactly why Greece must to privatise some of its under-utilised assets, and why it can do this without any danger of “bloodsucking capitalists stripping the wealth of the people.”

a.     The facilities have simply been abandoned. Equipment such as refrigerators, kitchens, air conditioners, and furnishings are simply rotting away, having fallen to the ground or floor. There has not even been an attempt to loot the place: it’s simply crumbling to pieces. I don’t understand why the Municipality which is responsible for the site, has not closed the units properly.

b.     The entire site has been poorly designed. Incredibly, not a single one of the 46 “bungalows” actually has a proper sea view, despite the fact that the island offers panoramic sea views on three of four sides. The bungalow entries face inwards, not outwards, and are not built near the edge of the island, but along a central avenue. Simply design elements, such as verandas and large windows overlooking the sea, are missing. 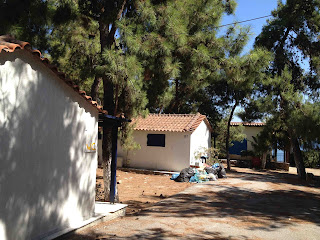 c.     The accommodation standard is unacceptable by today’s standards. I can imagine this place being built as a student hostel in the 1980s in some grand PASOK project for its “young pioneer” youth organisation, but today it is imply impossible to house paying guests in such rooms. 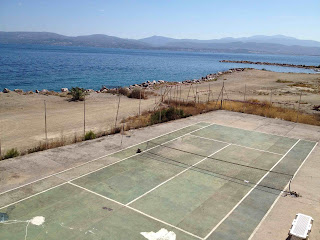 At one point, the littoral was used a garbage dump.

d.     The coastal littoral surrounding the island is an unmitigated disaster. At one time, it was used as a garbage dump. It has also been bulldozed and landfilled, and resembles a vast, barren dirt parking lot. It is difficult to understand how this will be rehabilitated, but a massive effort is needed.

The Municipal Council of Eretria is simply in no condition to develop and manage a hotel resort. The Greek government should exit any type of attempt to do so, and to its credit, is trying to privatise the “Xenia” hotel chains which were set up by the Greek National Tourism Organisations in the 1970s and 1980s, most of which have collapsed into dust in the same way the “Island of Dreams” has.

The Municipality has just launched an international tender for leasing the island to 2045. My company, Navigator, has published a short analysis of this development opportunity, together with some more photos from my visit. 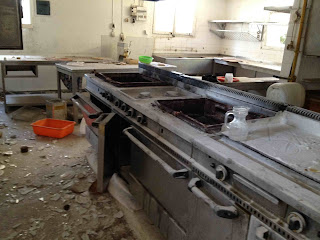 Island of Dreams: The Abandoned Restaurant

Besides being reminded of some factory tours in the wreckage of Communism, the other inevitable reminder was of Ozymandius. I’m wondering if any of Greece’s recent prime ministers have read the same poem.

I met a traveler from an antique land
Who said: "Two vast and trunkless legs of stone
Stand in the desert...
Near them, on the sand,
Half sunk a shattered visage lies, whose frown,
And wrinkled lip, and sneer of cold command,
Tell that its sculptor well those passions read
Which yet survive, stamped on these lifeless things,
The hand that mocked them and the heart that fed;
And on the pedestal these words appear:
"My name is Ozymandius, King of Kings,
Look on my works, ye Mighty, and despair!"
Nothing beside remains.
Round the decay
Of that colossal wreck, boundless and bare
The lone and level sands stretch far away.