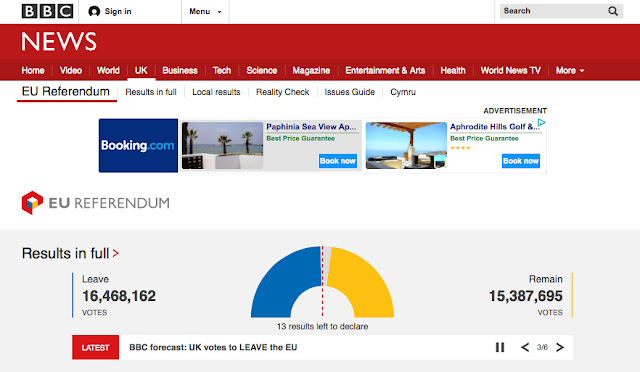 It’s Friday morning, June 24th and already I’ve received several inquiries about the meaning and the impact of the #Brexit vote. Although the full referendum vote hasn’t been counted, Leave currently has a lead of over 1 million votes, and in a referendum, it’s the number of votes that count, not their distribution.

So why Brexit? Primarily because domestic economic conditions have been so difficult, UK voters have cast a very strong protest vote.

High Cost of Living / Changing Economic Patterns
For years, the UK middle class has been “hollowed out” by high costs of living. The two main components of this are property prices and high debt amounts (and costs) for higher education. In contrast, the number of well-paying jobs in the UK has been shrinking, particularly for less-skilled workers. In this respect, the UK is not an outlier: these are common trends that affect nearly all OECD countries.
Just as these are common trends, this also means the EU is something of a symptom, not a root cause (with some important exceptions). The number of low-income jobs is rising because in a service economy, this is an expected trend. The next stage of this trend will be to replace human workers with software and robots, so this trend is only expected to continue, exacerbating the problem.

Property
Rising property prices have created an entrenched class of very highly rewarded insiders. Property prices have risen for a number of reasons: UK cities such as London are seen as a global haven for capital, and high-end property has been booming as a result, up until the recent stamp tax. UK local authorities (municipalities) have not been authorising enough new builds, or new builds in the right location. Economic immigrants from the European Union (in particular the lower-wage new EU Member States, but even older members like France or Spain) have been bidding up the cost of rent. And, perhaps most importantly, everyone has jumped on the property bandwagon because it has been an intellectually easy proposition. UK culture is now, arguably, dominated by property anxiety and the smug selling of everyone on this bandwagon.

Zero Hour Contracts and Apprenticeships
Like Germany, the UK has introduced labour legislation that has effectively turned millions of younger and low-qualified, service workers in to wage slaves while flattering national unemployment statistics. This is the zero hour contract, a work contract in which an employer hires an employee, but is not obligated to actually provide them with any hours of work. This is great for flexibility, but terrible for skills generation and wages. And just like the German “mini-jobs” legislation, this has been a purely domestic decision that has had nothing to do with the EU.
The same exact issue is seen with UK apprenticeships. Born out of a desire to see younger people enter and upskill in the labour force, instead employers like Starbucks or McDonald’s have been using apprenticeships as a way of reducing labour costs. Again, none of this has to do with EU decisions.

Trade
The EU has provoked at least two conditions which have exacerbated the British problem. The first is in trade. As a member of a large free trade zone, the UK economy now depends on the European Commission to monitor trade conditions and negotiate trade deals. There are a number of cases where the Commission has not reacted anywhere quickly enough to drastic cases of price dumping—notably involving multiple Chinese export sectors. Steel and building materials come to mind. The reaction in these cases must be swift: on an order of 1-2 months. The European Commission is simply not fit for this. Even here, however, I note that Member States have a responsibility to bring trade matters to the Commission, and the British Government has been quite remiss on this in the past.

Immigration
The second point is immigration (and emigration). Yes, there have been numerous EU immigrants to the UK: over 3 million. These have bid up the price of rent and have created downward pressures on labour prices. Most restaurants, hotels, retail outlets and other service industries in the UK today depend entirely on hosts of Polish, Lithuania, Bulgarian and Romanian workers, just as in the past they depended on other immigrants. This has created a new labour supply that has been, for the most part, extremely reliable and disciplined, and extremely useful for British employers. However, the number of non-EU immigrants to the UK is actually higher: over 5 million. And many of the latter carry cultural or social traditions which make integration and assimilation much more difficult.
Another point regarding population is that many British have actually retired and relocated within the European Union. These numbers do not show up adequately in the statistics: just over 1 million British have relocated within the EU. But this is because a large majority of British expats are retirees, and have continued their registration in the UK so that pension payments and National Health System access remain undisturbed. They actually live full time in areas such as Paphos, Cyprus, or the Spanish Mediterranean coastline.

Declining British Influence
A final point about the EU is that for at least 10 years, Britain has ignored the vital role of placing UK citizens in high-ranking positions within European organisations, starting with the European Commission. As such, Britain’s influence within the EU has been declining, while Germany’s has been increasing.
All these points have focussed domestic voter rage against the political system. The genius of politicians like Nigel Farage has been to define an external enemy (the European Union) as a focal point for that rage. This is a very old political method that has been an entrenched in politics since the time of the Roman Republic, if not longer.

So what brought about these referendum results? First of all, this referendum is a protest vote. But it is a protest not so much about the European Union, as about the dismal conditions of the British economy and society. Any referendum inevitably becomes about domestic political issues, and the UK Referendum is no exception.
Let’s look at some of the causalities expressed or implied.

Will British wages rise if 3 million EU workers are expelled from the UK?
Yes, but only if British prices rise as well. In the short term expelling 3 million mostly low-cost EU workers will bid up the price of labour, resulting in a wage increase. This wage increase will require hotels, pubs, insurance claims processors, building companies and many other firms to raise the prices they charge British consumers.
Over the medium term, however, this will accelerate the replacement of low-cost / low-productivity workers with software or automation. Over time in a developed economy, there is very little chance wages in low-cost, low-productivity professions will rise. It is more likely that job positions will be replaced.

Will British property prices fall if 3 million EU workers are expelled?
Yes. But that fall in prices will have an extreme impact on property demand, and therefore property prices. The trillions of pounds invested in the British mortgage system will be affected as a result. And the financial returns and capitalisation of everything from banks to pension funds will also be hit. The UK has created a financial monster from its property system. A correction is needed, but a correction has to be sustainable.

Will the UK “regain control” over its government if it leaves the EU?
Yes. However, I note that in most cases, the UK has agreed to every EU decision made over the past 30 years. You only have to examine British voting in the European Council or the European Parliament to understand this.
The main problems within the UK are not the result of EU decisions, but domestic British considerations and decisions.
There is nothing that shows to me that the quality of British politicians, and their decision-making process, is any better than the EU process. Micro- and domestic-considerations dominate, interpreted through an electoral prism.
A typical example here was the decision to allow UK universities to charge up to £ 9000 for tuition, together with the corollary decision that 50% of young adults should have a university education. These decisions have had nothing to do with EU policy, and have created tremendous distortions in the educational system, consumer spending and debt markets at a result.

Will the UK economy experience a resurgence from being able to strike free trade deals with other countries?
Doubtful. The UK already benefits from being part of the EU because the EU negotiates as a single trade bloc. This means that trade rivals such as China have to negotiate better terms.
Does anyone really believe that the UK will be able to negotiate a better deal with China alone? I don’t. At least, I remember what happened the last time the UK tried a major negotiation with China. Hong Kong is still suffering over it.
The UK will only be able to improve its trade position through two potential policy options:
I note that this second option has actually been EU policy for years, and that the UK has failed miserably at it in most sectors. Indeed, many British success stories today are actually due to immigrant managers or foreign companies buying and turning around British icons.

Leaving the EU will enable the UK to manage itself better
Doubtful. Does anyone really believe that Nigel Farage would be a better manager than Jean-Claude Juncker? I don’t.
This is not to say that I believe JC Juncker is a great manager: far from it. What I am saying is that the quality of elected public sector managers in nearly every country I work in is abysmal, because the political process no longer serves the goal of having competent national management. Instead, it serves either special interests, or a mix of demagoguery and populism, and I am not sure whether one is the handmaiden of the other, or whether one is the outcome of the other.
Whether we look at the United States or the UK or France or Greece, a common issue is the inability of elected insiders to respond to the fundamental challenges affecting society and the economy. Whether this is an inability due to lack of competence, or an inability due to lack of actual desire, is open to debate.
At the end of the day, the only thing that is going to save the average OECD countries is a mix of very hard work, continual innovation, strong foresight and forecasting skills, and honest and competent leadership.
Contrast that with what we have:
What is more dominant in the average daily engagement of a British citizen today? Facebook, or David Cameron? I believe the answer is Facebook. And I am not singling out British citizens: I believe this is the same for nearly every EU or OECD citizen.

Future post to deal with the next steps in the process. For now, it’s urgently time to get back to work.

This post was originally published on Navigator Consulting Group.
Posted by Unknown at 09:32