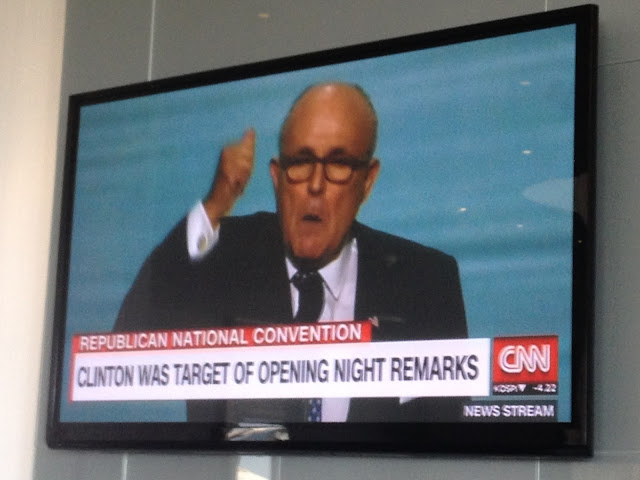 In my formative years (read, before 30), I used to watch a lot of CNN. The familiar drone of CNN used to be a familiar connection in the Godforesaken post-Soviet industrial cities I would be stuck in. Trying to get an internet connection in Dnepropetrovsk in 1999 was, well, hopeful.
As I grew older, and as CNN competed for ratings, it become really insipid. My own label for it was "CNN = Certainly Not News". About 16 years ago, around the time of the first G.W. Bush administration, it became so bland and biased that I simply tuned out.
This week I am using the CP as a workspace, and CNN is on the flat screen TV and is inescapable. It hasn't changed at all. They have spent about 90 minutes of the past 2 hours blaring on about Melania Trump's plagiarised speech at the Republican convention, but have said nothing of exactly just how dangerous Donald Trump is as a candidate in terms of policy. Nor have they really analysed why both Donald Trump and Hillary Clinton have absolutely terrible histories and why they are deeply flawed candidates.
They have shown Rudy Giuliani looking like a scary grandad foaming at the mouth, but have said nothing about his own brittle relationship with the truth. Ironically, Rudy has been criticising Hillary (about Benghazi), but there has been no equivalent analysis of his own policy failings, and his own attempt to cash in on the post-911 national security binge.
There has been zero policy analysis for either the Democratic or the Republican platforms. Other reporting is almost laughable. There is nothing about Nice or the coup in Turkey. There is nothing about Brexit. There is something about WADA and Putin (who cares?). There is a bus fire in Taiwan and a rape in India. There is no economic analysis at all. Remember, this is over a 2-hour period.
The "mainstream media" really stinks. It is a de-contextualised, celebrity-driven, fact-free medium that probably does more damage to really understanding "the news" than anything else.
It is an exercise in perception creation and perception management that owes as much to self-censorship and the advertising-driven business model as to any real attempt to report. Sad really.
Posted by Unknown at 15:32