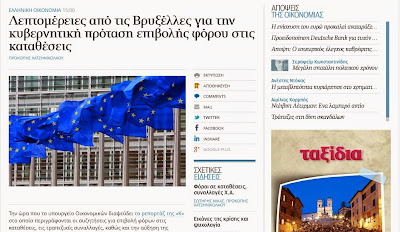 Kathimerini is reporting on plans discussed between the Greek Ministry of Finance and the "Brussels Group" to levy taxes on bank deposits as well as other bank transactions. If confirmed (and the Ministry of Finance has rebutted this), it will bear out a Cyprus-style "bail in" of depositors that I seem to be hearing about.


On May 5th, the Mail Online reported that the Ministry was considering levying a € 1 tax on every ATM withdrawal (Greece introduces cashpoint tax in desperate bid to raise revenue and stop run on banks as country teeters on brink of bankruptcy). I have not seen this confirmed in any other source.

It is difficult to rely on press reports about what may or may not be decided. It is also difficult to judge given the fact that if leaked (and even once announced) such a measure would probably lead to further panic flight among Greek depositors. But this is once again in line with other items reported and press, and Troika statements about a "Cyprus-like" bail in.