Troika Rhetoric on Greece increasingly resembles that on Cyprus 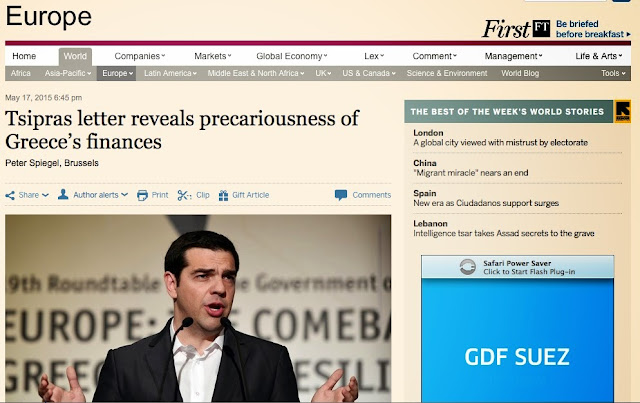 On April 28th (Notice of a probable Greek payment issue) I warned that the rhetoric emerging from Brussels on Greece was closely beginning to resemble that of Cyprus prior to the March 2013 bail-in.

This has now been confirmed by Peter Spiegel writing in the Financial Times yesterday (Tsipras Letter reveals precariousness of Greece's public finances May 17, 2015).

Greece came so close to defaulting on last week’s €750m International Monetary Fund repayment that the prime minister warned IMF chief Christine Lagarde he could not pay it without EU aid. Athens ultimately made the payment without financial assistance from the bloc but only by tapping a rarely used emergency account Greece holds at the fund — an unorthodox transaction that amounted to borrowing IMF funds to pay the IMF.

At the end of April, I was in Poznan, Poland in the week that Greek Finance Minister Gianis Varoufakis held a meeting with IMF Managing Director Christine Lagarde. Ms. Lagarde later stated that no advanced country had ever been late with an IMF payment, and that no extension would be granted to Greece.  -- a demand that Gianis Varoufakis later denied having made.

According to Kathimerini and the Financial Times, this demand was made by Prime Minister Tsipras, irrespective of what Mr. Varoufakis did or did not do.

But it is the confirmation in Spiegel's article about the language coming closer to an ultimatum--similar to what happened in Cyprus--which confirms what I have been hearing:

A similar tactic was used in March 2013, when the Cypriot government was presented with a severe bailout plan and told it must agree or lose ECB support for its failing banking sector. The idea of a “Cyprus-like” presentation to Greek authorities has gained traction among some eurozone finance ministers, according to one official involved in the talks.

In fact, such a presentation has apparently been scheduled for the next Riga meeting, in which the Eurogroup heads of state will present Greece with their own suggestions for a way to resolve the structural reform issues. Whether this is a "take-it-or-leave-it" ultimatum remains to be seen.

To Vima also reports today on a plan mooted by Jean Claude Juncker to try to bridge both sides of the crisis. It remains to be seen if this is harsh enough to please the Eurogroup hawks and the IMF. I imagine it is not. The European Commission denied the existence of such a plan.

The SYRIZA government has been increasingly creative in its approach to managing debt:


This policy can only run for so long. The fact that Prime Minister Tsipras continues to talk of "red lines" while refusing to make rational policy moves while being unable to maintain the normal operations of the state means that either a solution is coming soon, or Greece will default within the Eurozone. I remain convinced that a solution will be made, at terms dictated by the Troika, which contradict everything SYRIZA has promised. Whether SYRIZA can implement such an ultimatum remains to be seen.