The Bondfire of the Vanities

I was on my way back to the work after lunch in Limassol this afternoon when a friend called from New York with the news “The bond auction in Germany failed.” At first, I couldn’t quite understand what he was saying. We finished speaking, and my first action was to check Reuters, where the shocking news was on display.
It’s difficult to comprehend the magnitude of this event. From a EUR 6 billion, 10-year bond offering, only EUR 3.64 billion was raised. The Bundesbank stepped in to buy most of the rest. Analysts blame the low coupon offered (2%).
This event is disturbing for a number of reasons:
1.     It is perhaps the first German bond auction to be under-subscribed at this low a rate since Germany entered the Eurozone. It shakes investor confidence of the idea that Germany is a safe haven, and that Germany will continue borrowing at low rates.
2.     It is the last of a long sequence of bond sales which have seen rising yields and/or rising rates: Spain issues a 3-month treasury bill at 5.11% on Tuesday, up from 2.92% one month earlier. Italy’s 10-year bonds traded at above 6.7% this week.
3.    The EFSF’s bond yields are similarly rising, caught by uncertainty over France’s AAA credit rating and a general lack of understanding of their structure or future plans.
The impact in Europe was immediate: the Euro and the European exchanges fell.
If this event had occurred in isolation of everything else occurring in Europe, it could perhaps be shrugged off. After all, German 8-year bonds have a 3.25% coupon; German 15-year bonds have a 6.5% coupon. It’s likely that issuing 10-year bonds in the present climate at 2% is something of a pricing error, perhaps reflecting some tendency of arrogance or complacency. 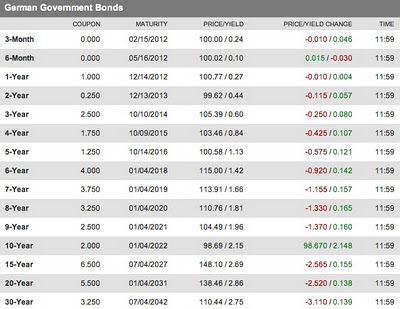 But the problem is precisely that this event does not occur in a vacuum: It occurs amidst a swelling tide of market caution, which some may even choose to call panic.
French and Belgian bond yields have been rising; Austrian banks have been issued stricter loan conditions for Eastern Europe; France appears about to lose its AAA rating; the EFSF does not appear to be able to raise the remaining EUR 250 billion in credit it has available; the US debt supercommittee talks appear to have failed—expenditure cuts will only start occurring in 2013, at a time when Federal debt:GDP will be higher than 100%; and total public debt higher still.
As I wrote in yesterday’s post:
Absent a major political reform in the Eurozone, or a dramatic improvement in market confidence, we are heading for a European crash in days or weeks, not months. … Everything is now based on market sentiment, and on a European banking system which is rapidly showing signs of weakness, if not collapse. I am not counting on sentiment to recover any time soon.
I wonder if this is Europe’s Lehman moment, and what else lies ahead.
© Philip Ammerman, 2011
Navigator Consulting Group
www.navigator-consulting.com
Posted by Unknown at 22:04