The First Papademos Speech to Parliament 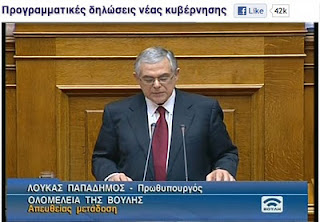 I’ve just tuned in to Dr. Loucas Papademos’s first speech to the Greek Parliament, outlining his economic programme.
It’s interesting that he suggests that consequences of austerity include unemployment, business closure and social unrest. This is true, and was probably specifically included in the speech as a sop to New Democracy. Yet his recommendations for this are unimaginative and anodyne:
a.     More and faster structural reform to guarantee competitiveness
b.     Rapid absorption of ESPA funds
c.     Rapid investment in renewable energy
None of these “solutions” is really a solution for the large majority of workers, pensioners or company managers:
Faster Structural Reform
In order for this to work, the structural reform has to be implemented in practise. This will lead to higher unemployment and reduced spending among the public sector workforce, and much of the private sector workforce, if this actually occurs. Any “inheritor” of state-owned enterprises will then have to further restructure to work out debt, install new IT systems, retrain, etc. It will be at least 2-3 years before the average worker will see any results from this.
Rapid Absorption of ESPA (European Union) Funds
Although this could in theory help, the reality is that the funding is quite low compared to the challenges facing the country. Furthermore, the funding will be channelled into large infrastructure projects or other projects which do not materially affect the average worker or household, but do affect a handful of specialised enterprises. There was also no mention of reducing corruption or political favouritism in the absorption of these funds.
Rapid Investment in Renewable Energy
This is false economic logic. Renewable energy costs more per kw-h than the energy currently produced by Greece’s energy mix. This means that the energy consumer—the household—will soon be burdened with a higher energy cost, including higher VAT and taxes on this. And there is, of course, no consumer choice: the consumer must consume this energy: there is no alternative, given the Public Power Corporations status as a public monopoly, and given national policy in this area. Furthermore, Greece must import nearly all capital investment for energy generation: solar panels produced in Germany or China; wind turbines produced in France or Denmark.
What was notable by its absence was any kind of bold initiative which could change market sentiment:
a.     A plan to privatise Hellenikon;
b.     A plan to delineate oil and gas exploration zones in Greece’s legal territory;
c.     A plan to license mineral exploration and development in Greece (including investments cancelled or delayed by PASOK)
d.     A plan for tourism and shipping in Greece.
Instead, it was the same old, discredited solutions we have been hearing for years now. If Greece had a million Euros every time a Greek politician said they would accelerate absorption of EU funds, these funds would have been absorbed by now.
It was interesting that he called for broadening the tax base and cracking down on tax evasion as a form of social justice. This was followed by a discourse on why Greece must stay in the Eurozone. He calls for all public servants, including people working in tax authorities, to implement their duties diligently.
My impression is that he is being told very carefully what to do or say by his cross-party minders, and that as a result not much is going to change, certainly nothing near what the situation requires.
Some related news from Greece:
ND leader Antonis Samaras announces that he won’t provide any written guarantees that he will support the new government, despite European requests to do so. In parallel, he states that he will not support any new austerity measures.
ND MP Sotires Hadjigakis has been expelled from the ND Party, ostensibly due to his comments regarding the presence of far-right elements in the party. It remains to be seen whether Mr. Samaras will be able to hold his party together in the face of what can only be described as very contradictory statements and policies. Something tells me he will not be able to, and that the temporary gains he enjoys in the opinion polls will be illusory.
On the other side of the aisle, George Papandreou has apparently refused to step down as leader of PASOK, and will probably have to be removed by popular vote in a party conference. Perhaps his referendum will occur after all.
And finally, everyone is gearing up for another violent set of protests this Thursday, in honour of November 17th.
To summarise: despite all impressions to the contrary, not much has changed. The situation has worsened. It remains to be seen what will actually be done by February 19th.
© Philip Ammerman, 2011
Navigator Consulting Group
www.navigator-consulting.com
Posted by Unknown at 21:10